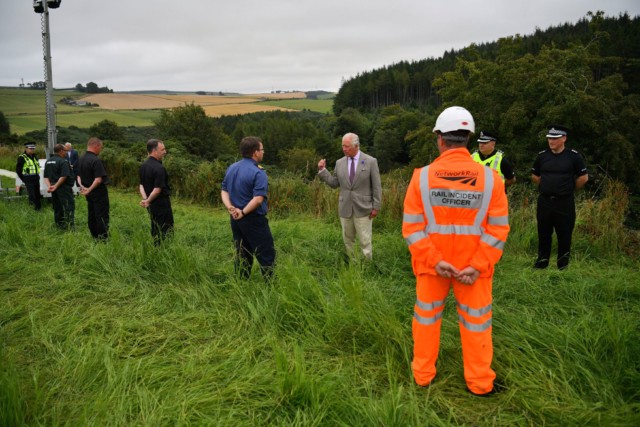 THE Prince of Wales has arrived at the site the tragic Aberdeenshire train crash which killed three people.

Charles, known as the Duke of Rothesay while in Scotland, is meeting and thanking emergency responders who were among the first on the scene of the incident on Wednesday.

Prince Charles has visited the train crash site this morning He has been surveying the wreckage Pictures show him chatting to police officers and rail workers as he surveys the wreckage left behind.

Driver Brett McCullough, 45, conductor Donald Dinnie, 58, and passenger Christopher Stuchbury, 62, all sadly died when carriages of the 6.38am Aberdeen to Glasgow Queen Street ScotRail service derailed near Stonehaven amid heavy rain and landslips.

Their devastated families and loved ones have been paying tribute in statements released through Police Scotland.

Nicola Sturgeon last night passed on her condolences to the three rail disaster victims’ families — and insisted the whole country was thinking about their ordeal.

The First Minister said the “hearts of the nation” were with relatives of Brett McCullough, Donald and Christopher after the landslip smash tragedy.

She also hailed emergency crews who raced to the scene and braved treacherous conditions to reach the mangled ScotRail service on a remote embankment near Stonehaven, Aberdeenshire. We also told how four survivors of the horror were discharged from hospital yesterday.

Six people were rushed to hospital, though there injuries were said to be not serious. Two of them remain in hospital.

It has emerged that a lack of phone signal saw the crash go unreported for a “significant” period of time, according to reports.

Emergency services had been alerted at 9.45am on Wednesday. But the service left Aberdeen at 6.38am and only travelled to just south of Stonehaven, leaving a window of a few hours in between.

We told how a brave crew member walked for a mile to raise the alarm.

The unidentified worker managed to get out of the wreckage and trek to the nearest signal box.

They were able to tell officials about the smash and get them to close off the rail line to stop any other catastrophes.

It has now emerged that was due to a a lack of mobile phone coverage at the remote site.

One railway union representative said that concerns were raised about the train’s progress at 9.30am.


Did you miss our previous article…
https://www.hellofaread.com/royal/meghan-and-harry-latest-new-11-1m-california-mansion-was-owned-by-russian-oligarch/

EastEnders legend is unrecognisable with huge beard and grey hair 19 years after quitting...