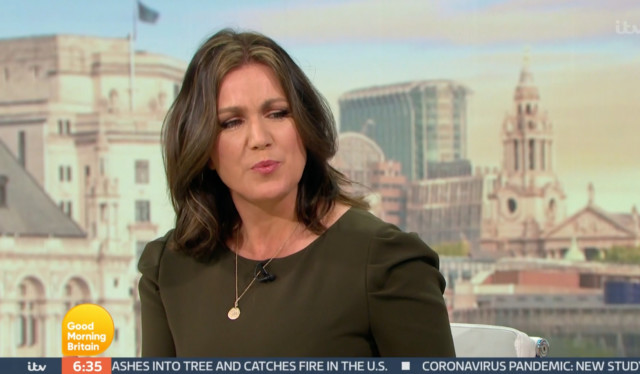 SUSANNA Reid spoke passionately about the heartbreaking moment the Queen was forced to sit alone at Prince Philip’s funeral – despite pubs “exploding” with crowds over the weekend.

The 50-year-old TV presenter pointed out how social distancing rules have stopped those in grief comforting each other with a hug.

Susanna Reid questioned the limit of 30 people at funerals

Speaking on Good Morning Britain today, Susanna said: “Of course one of the things we’re doing to keep us safe is restricting numbers.

“But over the weekend we saw hospitality explode for the first time since restrictions lifted.

“If anyone has been into central London you will see the roads crowded with people.

“Of course this is now allowed with social distancing and being outside is safer because the transmission risk is diluted by fresh air.

The Queen sat alone at her husband’s funeral

“But of course funerals are still limited to 30 people and we saw Prince Philip’s funeral over the weekend.

“Everybody’s heart broke when we saw the Queen on her own.

“And I think a lot of people wonder when you’ve got everything opening up and a huge cavernous place like the chapel at Windsor, why does the Queen have to be alone and not comforted or at least have someone there, a metre away, to be with her?”

Covid restrictions meant the monarch, 95, could not be comforted inside St George’s Chapel at Windsor as she paid a final farewell to her husband of 74 years, Prince Philip. The image of her grieving alone moved viewers to tears

The heartbreaking image of her grieving alone led to calls to ease social distancing at funerals.

Yet, in contrast, some streets were packed with drinkers — and fans began returning to sports events.

No one felt more sympathy for the Queen than Craig Bicknell, 43, who had been unable to bear the sight of his mum breaking down at his dad’s funeral.

He pulled up a chair to comfort sobbing Barbara, 71, only to be told by a worker at Crownhill crematorium, Milton Keynes: “Sorry, you have to put the chairs back I’m afraid.”

After posting footage online, Craig was inundated with support.

Having watched the Queen’s ordeal on Saturday, he said: “It brought back a lot of feelings.

“If I had been there, I would have gone to her. I would have comforted her in a heartbeat — even with the rules as they are.” He added: “I lost my best friend and then also my dad during Covid, so I’ve experienced two Covid funerals. I don’t get why these rules are in place.

“We have vaccines and we have rapid tests, so why not make people do a test?

“Thirty people at a funeral, but I can go to the snooker or a cup semi-final. How does that work?

“The Queen is a human being. For her to go through that is tough.

“The Government needs to let people go to funerals and sit with each other.

“We can do other things. It doesn’t make any sense.”

Call of Duty Warzone gets ‘God Mode’ cheat that lets you kill hackers in...