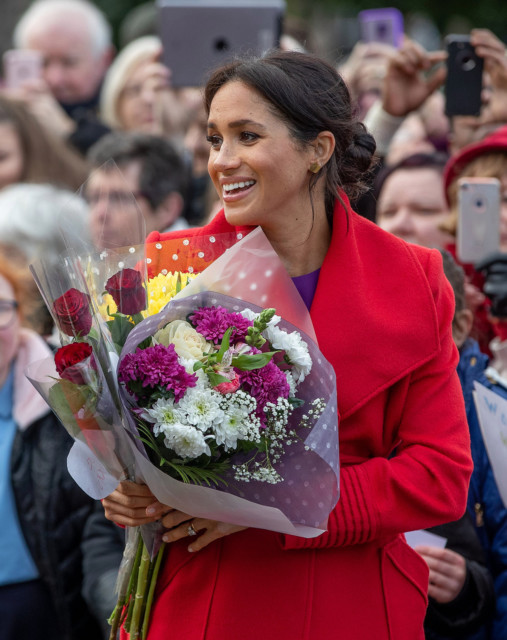 But eagle-eyed fans already predicted that Meghan and Harry would name their daughter Lilibet – and the clues date back to the day the couple wed in 2018.

Fans knew Meghan would name her daughter Lilibet before the announcement At a walk-around in Birkenhead, Prince Harry asked a mother how she spelt her daughter’s name, Lily

Lilibet is a touching nod to her great-grandmother the Queen, who was affectionately called the nickname by her family.

In 2019 when Meghan was pregnant with her first born Archie, the pair hinted towards the name they liked if they were to have a daughter.

While walking around in Birkenhead in January 2019, the Duchess revealed that she was six months pregnant – but that she didn’t know whether she was having a boy or girl yet.

But, Prince Harry was heard asking one mother from the crowd of people how her daughter Lily’s name was spelt – which is the name the Sussexes have now called their own baby.

At the time, Meghan insisted that they did not know the sex of their baby, which turned out to be little Archie.

But Harry’s spelling question in Birkenhead is all the more significant now – as his own daughter Lili is a unique variation of the name he asked about in 2019.

And another clue that may have given away the adorable girl’s name before they found out they were pregnant is the bridal bouquet Meghan held at her wedding,

And the newly weds at the time remembered the late Diana, Princess of Wales, at their wedding by also selecting forget-me-nots, her favourite flowers, for the bouquet.

In the same fashion, Harry and Meghan have also kept Diana’s spirit alive by naming their daughter after her.

The Queen’s own grandfather King George V would affectionately call her “Lilibet” imitating her own attempts to say Elizabeth.

The sweet nickname stuck and she became Lilibet to her family from then on.

The Duke of Edinburgh also referred to his wife as Lilibet, writing to his mother in law after their wedding: “Lilibet is the only ‘thing’ in the world which is absolutely real to me.”

In April, bookies only had 16-1 odds that Harry and Meghan would call their daughter Elizabeth after her great-great-grandmother.

Fans online, however, picked up the hints, with one writing on Reddit: “I read a prediction somewhere that they could use Lily for the Queen because of her childhood nickname Lilibet.

“And because of Meghan’s wedding bouquet being Lily of the valley. I think that’s really sweet.”

A statement published on their Archewell website said yesterday: “On June 4, we were blessed with the arrival of our daughter, Lili.

“She is more than we could have ever imagined, and we remain grateful for the love and prayers we’ve felt from across the globe.

“Thank you for your continued kindness and support during this very special time for our family.”

Her Majesty and the royals tonight said they were “delighted” at the news and made a touching tribute to the couple and their baby girl.

The Duke and Duchess of Cambridge tweeted this evening: “We are all delighted by the happy news of the arrival of baby Lili.

“Congratulations to Harry, Meghan and Archie.” And Prince Charles and Camilla also wrote: “Congratulations to Harry, Meghan and Archie on the arrival of baby Lilibet Diana

“Wishing them all well at this special time.”

Meghan and Harry have not yet released a picture of their darling daughter.

Lilibet is also Prince Charles’ fifth grandchild and makes Archie, who turned two in May, a big brother for the first time.

She is now eighth in line to the throne – behind her own father Prince Harry, uncle Prince William, grandfather Prince Charles, her cousins, and her older brother Archie.

This year has been a bumper one for royal babies after Princess Eugenie welcomed a son August in February and Zara Tindall had a boy Lucas in March.

Princess Beatrice is expecting her first child, who will be the Queen’s 12th great grandchild, in the autumn.

Harry and Meghan’s only daughter is the most senior royal in the current line of succession to be born overseas.

Her arrival has pushed Prince Andrew, who was born second in line in 1960, down to ninth place.

The baby is not entitled, at this stage, to be an HRH nor a princess due to rules set out more than 100 years ago by George V.

Major Covid change could cost you £500 from next week as Boris Johnson axes...