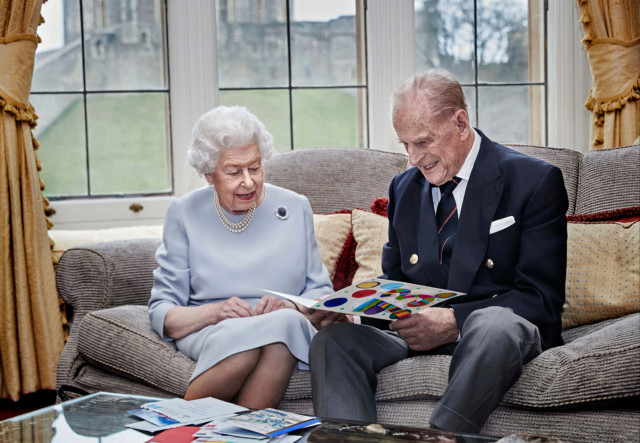 THE Queen and the Duke of Edinburgh opened messages from their great-grandchildren as they celebrate 73 years as a married couple.

The royals, who married on November 20 in 1947 at Westminster Abbey, were photographed together on a sofa at Windsor Castle where the pair are spending lockdown.

The pair opened cards from well-wishers They have been married for 73 years July 1939 our future Queen, who was just 13 years old at the time, is said to have fallen in love with Philip – and they began exchanging letters.

The couple became secretly engaged in 1946 and Elizabeth’s dad, King George VI, ordered that any formal engagement was delayed until after his daughter’s 21st birthday – in April 1947.

The couple became secretly engaged in 1946 and Elizabeth’s father, King George VI, ordered that any formal engagement was delayed until after his daughter’s 21st birthday – in April 1947.

When the wedding finally took place, rationing was still being used in England two years after World War Two.

It meant the Queen needed ration coupons to buy material for her gown, designed by Sir Norman Hartnell.

Philip, 99, can be seen smiling as he opens a handmade card adorned with the number 73 from grandson William’s children George, seven, Charlotte, five, and two-year-old Louis.

It was plucked from one of a number of cards from well-wishers on the table in the Oak Room.

The Queen, 94, was pictured in her Chrysanthemum Brooch made of sapphires and diamonds which she also wore on her honeymoon and 60th wedding anniversary.

The photo was taken earlier this week at Windsor, where they have formed “HMS Bubble 2” for the month-long lockdown.

Royal sources said they are spending their anniversary privately at the castle.

Their HMS bubble, however, recently caused some loyal palace workers to threaten not to work over Christmas.

The mutiny is said to involve about 20 staff including cleaners, laundry and maintenance workers who are unwilling to isolate from loved-ones during the festive period. The couple’s Royal marriage is the longest in history

LEGO Star Wars: The Skywalker Saga review – the Daft side of the Force

Megan McKenna celebrates as her X Factor: Celebrity song This hits No3 in the...

What is Apache Log4j?