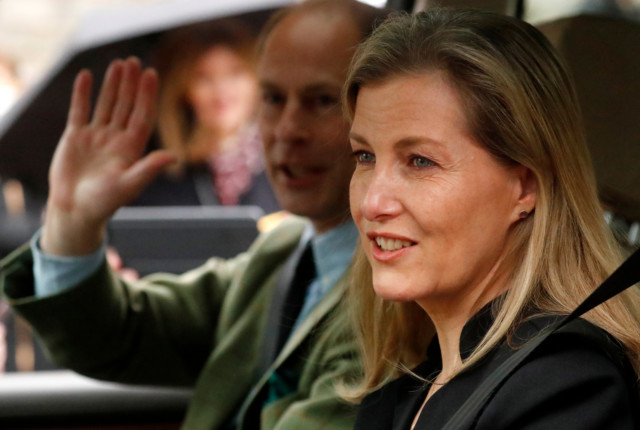 THE Countess of Wessex said the Queen has been “amazing” after visiting the monarch today with her husband Edward following the death of Prince Philip.

The Earl of Wessex and Sophie were seen arriving at Windsor Castle in a blue Land Rover Discovery at 11am and spent around an hour with the Queen.

Sophie spoke to reporters from the car driven by her husband, the Earl of Wessex Prince Edward arrived at the Castle at around 11am

As she left the castle, the Countess of Wessex said: “The Queen has been amazing.”

Sophie spoke to reporters from the car driven by her husband, the Earl of Wessex.

Prince Philip, 99, died at the Castle – where stayed with the Queen during the coronavirus pandemic – yesterday morning.

The Prince of Wales’ car was pictured at the royal residence in the afternoon afternoon – just hours after Buckingham Palace announced the death of the Duke of Edinburgh.

Charles, 72, was pictured in the passenger seat of the silver Tesla as he rushed to support the Queen, who is grieving for her husband.

Buckingham Palace announced the news of Prince Philip’s passing at midday, as the Queen spoke of her “deep sorrow” after her “beloved” husband passed away “peacefully” at Windsor Castle.

The Prince of Wales, who is Prince Philip’s eldest son, received the devastating news of his father’s death on his 16th wedding anniversary to Camilla.

Yesterday marked 16 years together – but celebrations were on hold as the royal family grieves for the Duke of Edinburgh. Her Majesty, 94, yesterday shared a poignant photo of Philip in a heartfelt tribute to her “strength and guide”.

The tragic news is a huge blow to the Queen, with the Duke widely known to be the backbone of the Royal Family.

Just after midday on Friday, the Union Flag was lowered to half-mast outside Buckingham Palace and on public buildings across the UK as the world mourns his death. A statement from Buckingham Palace said: “It is with deep sorrow that Her Majesty The Queen has announced the death of her beloved husband, His Royal Highness The Prince Philip, Duke of Edinburgh.

“His Royal Highness passed away peacefully this morning at Windsor Castle.

“Further announcements will made in due course.

“The Royal Family join with people around the world in mourning his loss.”

Prince Charles, the heir to the throne, inherited his father’s title of the Duke of Edinburgh yesterday.

But the title will later be inherited by Philip’s youngest son Prince Edward on Charles’ eventual accession to the throne.

In 1999, Buckingham Palace announced that Edward would succeed his father in the Dukedom with the blessing of the Queen and Prince Philip.

Announcing the news of Prince Philip’s death, the official Royal Family website was replaced with a single page and heartfelt tribute to the Duke.

Prime Minister Boris Johnson paid tribute and said “he helped to steer the Royal Family and the monarchy so that it remains an institution indisputably vital to the balance and happiness of our national life.”

Dancing On Ices Kevin Kilbane and Brianne Delacourt have moved in together after just...