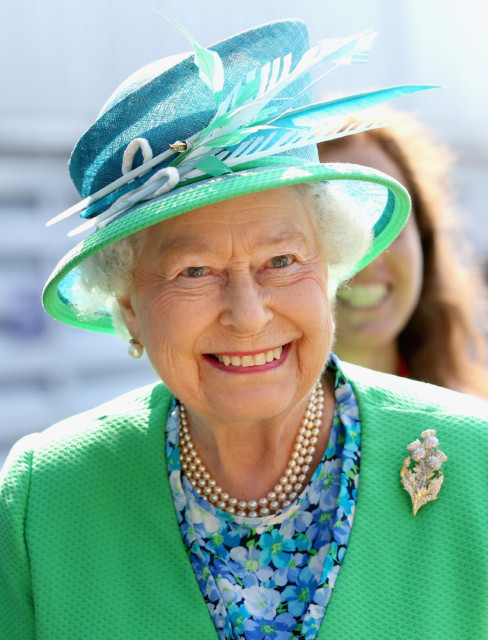 THE QUEEN is known to have a pretty extravagant jewellery collection having inherited a number of pieces from her family, as well receiving many more as gifts throughout her 64-year reign.

But among the stunning tiaras, brooches and even watches that make up the Monarch’s collection, it’s a simple pearl necklace she favours most.

The Queen, 94, will also be seen wearing her three-strand pearl necklace

The Queen will almost always be spotted wearing the stunning three-strand pearl necklace which was a gift from her father, King George VI.

The pair were incredibly close up until his death in 1952 which left the 25-year-old Elizabeth heartbroken – and has since worn the pearl necklace every day as a reminder of her father.

Upon receiving the pearls as a young girl, the Queen supposedly loved the precious necklace so much that another almost identical set was made for her so that she could wear them interchangeably.

According to Express, she was later gifted a third string of pearls, featuring a diamond clasp, by the Emir of Qatar, which added to her ever growing collection of pearls. The necklace was a gift from her father, King George VI, and was gifted to her as a young girl She later had others made to replicate the original

But her pearl collection didn’t end there as the monarch also received a pearl shell from the ruler of Bahrain on her wedding day, which stored seven single pearls.

Two of these were made into stunning pearl drop earrings alongside another pair she’d inherited from Queen Victoria, who was gifted the set from her husband Prince Albert in 1847.

While the list of jewellery items featuring delicate pearls could go on, it’s clear she’s particularity fond of the rare and elegant jewel.

And she isn’t the only one as princess Diana was known to be a lover of pearls and so to is the Duchess of Cambridge Kate Middleton who has borrowed several items of jewellery from the Queen in the past, including a four-strand pearl choker. The Queen has quite an extensive pearl collection The Queen still wears the pearls around her neck

The choker is made up of cultured pearls that were a gift from the Japanese government,and was fastened with a diamond clasp, according to Express, and was commissioned by the Queen herself.

Kate’s love affair with pearls perhaps began after wearing the Collingwood pearl and diamond earrings, which were given to Diana as a wedding present.

She’s been spotted wearing the earrings on a numbers of occasions and she’s also been snapped wearing a three-strand pearl and diamond bracelet that also belonged to Princess Diana.

We also shared how the Queen cleans her diamonds using GIN to give them an ‘extra sparkle’, says royal dresser.

Plus the Queen has an ‘outstanding memory’ and can recall the significance of every piece of jewellery, fashion expert claims.

Meanwhile The Queen has many ‘secret rooms’ in Buckingham Palace including an indoor pool, cinema and a doctor’s office.

Queen’s Household Cavalry moved away from London after Covid outbreak

Three households could be able to meet at Christmas over 5 days under plans...