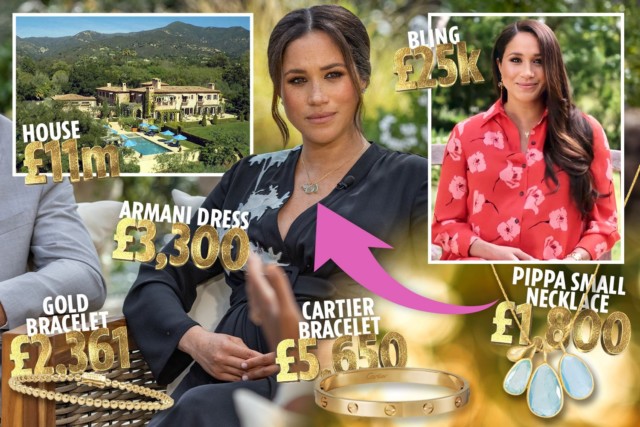 WHEN Meghan Markle joined the Royal family, her style seemed instantly accessible, with a wardrobe that mixed high end fashion with the affordable and sustainable – especially when it came to jewellery.

But the latest picture of the Duchess of Sussex – wearing £25,000 worth of gold – suggests she also has an eye for the blisteringly expensive.

The Duchess has been splashing out and wearing more expensive clobber

Appearing at the Vax Live conference over the weekend, where she discussed the effect of the pandemic on women, she wore a £5,000 Cartier bracelet, Princess Diana’s £17,800 Cartier watch and a £2,361 gold bangle.

The mum-to-be also included her usual message piece – a women’s power necklace at the more affordable price of £102 – but the Caroline Herrera dress was no snip at £1,200.

The couple are now estimated to be worth around £120million.

So has the fiercely independent Duchess, who was worth millions before meeting Prince Harry, come full circle in the financial stakes after Megxit? “Meghan’s financial independence was something she always valued and missed when she married into the royal family,” Katie Nicholl, royal correspondent and author of Harry and Meghan, tells HOAR.

“This is a woman who came from humble beginnings and worked hard to succeed and make it to the top.

“Losing her financial independence and essentially becoming a ‘kept’ woman was really hard for her after so many years of being self sufficient.

“She had always been independent so having to ask for money – whether that was for dresses or a home refurbishment – was way out of her comfort zone.” As a successful actress, Meghan built up a large nest egg before meeting her future husband, in 2016.

Meghan had also established herself as an influencer, earning an estimated £56,000 a year from endorsements on her lifestyle website Tig.

“She recognised early on the power of social media and her blog The Tig spawned a loyal following,” says Katie.

“She has always been business minded, plugging and working with companies and products she genuinely likes and believes in. She’s smart, business savvy and knows the power of her own brand which she was always willing to market and cash in on.

“I would imagine she was  disappointed to have to close down all of her very successful platforms, but ultimately it was a sacrifice she was prepared to make to marry Harry.”

When she walked down the aisle in 2018, she is estimated to have brought £3.5million to the marriage, according to Forbes.

At the time, she had no property, having rented the Toronto townhouse she lived in while filming the legal drama. The stylish actress – who also dabbled in a fashion design with her own collection with Canadian story Reitmans – had an expensive taste in clothes.

At a Suits event in March 2016, she was snapped in a £480 black Theory blazer, £920 leather trousers by Helmut Lang trousers and nude Aquazzura heels which retail at £490.

Her favourite designer was pal Misha Nonoo, and she wore a £400 metallic mini dress to the Vogue fund awards in 2015.

But jewellery was clearly not her thing – with most pictures in her pre-Harry days showing her free of bling on her arms and neck, and only the occasional subtle earring.

Her one exception was the pricey Canadian jewellers Maison Birks, who Megan discovered through her stylist pal Jessica Mulroney. She was seen sporting their £470 essential gold bar earrings in 2016 and also wore Birks £740 opal earrings as the couple announced their engagement.

She now owns 16 pairs of Birks, including their £7,200 diamond snowstorm shoes.

“Meghan was always very proud of her success and she enjoyed the money that came with it,” says Katie.

“While she was never frivolous when it came to spending money she enjoys the finer things in life, designer shoes and frocks and eating out at nice places.

“She would often reward herself with an expensive or special piece of jewellery after working hard.” For their engagement shoot, Meghan put on the most expensive outfit she’d ever worn – a Ralph and Russo that costs an eye-watering £56,000.

After her engagement, however, she chose her wardrobe carefully, using her new role in the Royal Family to champion companies that were sustainable and affordable.

Everlane was one of her favourite sustainable brands, and she wore one of their jumpsuits, £113, on two separated occasions, causing the store to sell out both times.

During her 2018 Australian tour she wore a £175 striped Jada dress from ethical brands Reformation and she even championed Marks and Sparks, wearing one of high street store’s £45 jumpers to a radio show in 2018 and their gloves to a Christmas day visit to Sandringham. The £175 striped Jada dress was a wow in Australia

Her jewellery also reflected her desire to appear frugal, as well as highlighting the causes she feels passionate about.

Cheaper brands included Missoma,who made the £45 Interstellar Ring she wore in 2018 on a visit to Scotland, British designer Pippa Small, whose £160 bangle she wore in March 2019.

She wore earrings by Laura Vann, a British brand that aims to combat throw-away fashion and Roxanne First, a company that sources ethical diamonds and calls itself the ‘go-to site for the independent woman building her own legacy’.

She also chose brands that benefit animal charities and women survivors of war.

“While she enjoys dressing up for the red carpet, Meghan is most comfortable  in her casuals and she has always been into ethical and sustainable fashion,” says Katie.

“I think Harry was drawn to that and liked the fact that Meghan was as comfortable in the bush in Botswana as she was glamming it up on the red carpet.” The Missoma ring on her third finger was just £45

Meghan may have felt her budget, and her own sense of style, was stifled while she represented the royals in the UK, but her newfound freedom in LA has seen her fork out on a new wardrobe.

Her maternity clothes – from the £370 La Ligne Pyper silk dress she wore in a family snap released in March to the Herrera dress in the latest picture – have ratched up in price from her more modest royal days.

The infamous Oprah interview, in March, saw the Duchess styled in an Armani gown, which retails at £3,300 and Aquazura heels and wearing pricey jewellery including a £5,650 Cartier bracelet, a diamond tennis bracelet previously owned by Princes Diana, £400 Birks topaz earrings and a necklace by Pippa Small, which cost £1,800. Meghan’s fashion flair has been given free rein

But, having relinquished claims on taxpayers’ money since their exit in March 2020, the couple have been raking in the cash and can well afford their privileged lifestyle.

Meghan’s royalty cheques from the streaming of Suits meant the money has continued to pour in and is thought to have provided a large chunk of the deposit on the £11million Californian mansion.

In September, Harry and Meghan partnered with Netflix to form a production company that will create “inspirational family programming” in a deal that could earn them between £70million and £170million.

As well as releasing her first children’s book, The Bench, Meghan has also been regaining her internet presence, signing a three-year deal with Spotify to produce podcasts through the couple’s Archewell Audio brand.

The deal worth up to £12million, could earn the couple about £2.5million in post-tax earnings per year.

“I think Meghan is a lot more relaxed now that there are no palace restrictions and she doesn’t have to adhere to royal protocol,” says Katie.

“She can wear what she wants – and that includes black which she loves – and not have to worry about being criticised.

“She is also free to accept gifts from designers and jewellers who are all clamouring to dress her which was something she wasn’t able to do when she was a working royal.”

We tested the best slow cookers on the market – and these could save...

X Factor Martin Bashir reveals dead sibling whispered to him to sign up to...