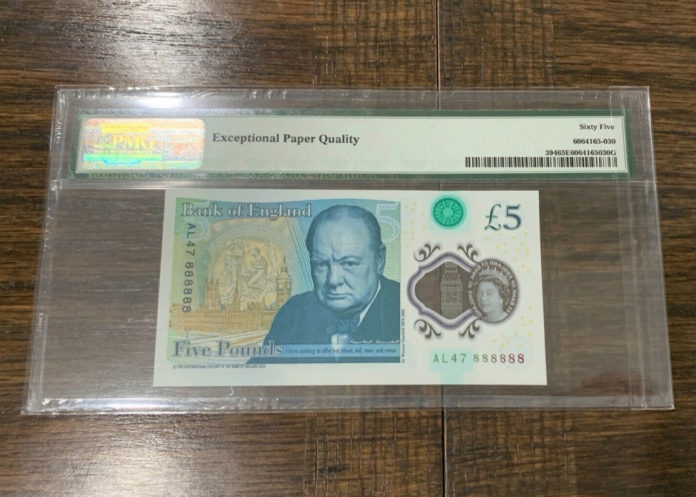 THE new £20 notes are now in circulation. And the right ones are worth a lot more than that. Banknotes with early serial numbers are very popular with collectors.

The very first one, bearing the code AA01 000001, is given to the Queen. But serial numbers close to that could net you a healthy profit online. The note’s unique code can be found on the back of the note.  Here are six other sought-after banknotes that give maximum bang for your buck.

Listed on the auction site with its face value as the starting price, it got 19 bids in total.

Check to see if your note has an eye-grabbing serial number like this.

Value: Up to £93 – Some gun-mad collectors like notes with an AK47 serial number, a nod to the AK-47 assault rifle.

One such note recently sold on eBay for £93.09 after attracting eight bids.

It was too good to be true. The buyer did not pay up and admitted he bid as a wind-up.

Value: Up to £65 – The Merlyn Lowther and Charles Darwin paper tenners were replaced by a Jane Austen polymer ­in 2017.

Shoppers were urged to change old notes for new but you may still have an old bill at home. This particular one sold for £65 on eBay, although it is not entirely clear why.

It was uncirculated, meaning it looked brand-new and had no ­handling folds or creases.

Or perhaps collectors were keen because it was printed in 2000 with an AA01 serial code, making it one of the first to be printed in the new millennium.

Value: Up to £44 – The polymer tenners don’t seem to be as popular as the fivers but some will net you profit.

Notes with low serial numbers – typically starting AA01 – are valuable as being among the first to be printed in a run.

But the highest bid this year on the so-called “Bond note” is a more modest £28.

Micro-artist Graham Short engraved a tiny portrait of author Jane Austen into the hologram on just five notes. He donated one to the Jane Austen Museum in Chawton, Hants, but spent the other four in local stores and cafes around the country before letting the public know what he had done.

The notes were estimated to be worth up to £50,000 apiece, sparking a nationwide treasure hunt. Three have been tracked down so far. Are YOU sitting on the fourth?

If so, you could net a tidy profit, although not nearly as high as that initial estimate. The most a Short note has sold for – so far – is £5,000 at a charity auction.

PS5 live stock updates – Argos ‘to get consoles TODAY’ plus Playstation restocks at...

Emmerdale spoilers: Nate Robinson proposes to Tracy Metcalfe – as she breaks down over...

Selena: The Series on Netflix: What time is it released and when is Part...

EastEnders Keanu will return to get revenge on Phil Mitchell for explosive 35th anniversary...