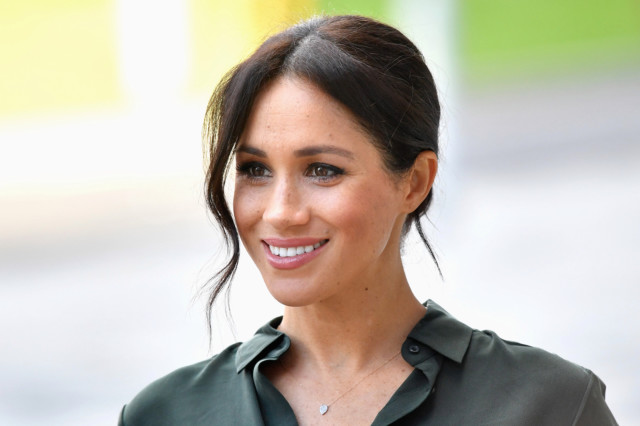 AS Walter Pitkin once declared: “Life Begins at Forty”, and for Meghan this seems to be the case.

Now settled into her £10million Montecito mansion, with Harry, Archie and Lilibet by her side, she seems more comfortable in her own skin than ever, having finally broken free of the chains of the oppressive Firm and the British press, which has always treated her like the wicked step-sister.

Meghan Markle is the self-actualised embodiment of female empowerment, Alison Prato writesHarry and Meghan dropped some bombs about racism in the Royal Family in their Oprah interview

To this American, seeing Meghan — an unconventional, 39-year-old, divorced bi-racial woman from a broken family — step into the lily-white, stick-up-their-a** Royal Family has been a breath of fresh air.

She’s just like us, we thought. Sure, she’s a famous TV star and she’s stunningly beautiful, but she’s flawed, self-deprecating and talks about her struggles — and we dig that.

Since stepping back from their roles as part of the centuries-old institution, Meghan and Harry have become American mega-celebs: Outspoken against social and racial injustice, standing up for what they believe in, and promoting inclusivity and equality.

Meghan continues to cement her reputation as a fierce feminist, with no end in sight. And here’s why we should be celebrating this self-actualised embodiment of female empowerment as she heads into her 41st year:

From the jump, Meghan has been told the rules — and she chose to ignore them.

When she first started dating Harry, she regularly greeted the Kensington Palace guards with hugs.

After a few visits, someone mentioned to her that this was frowned upon — something that was just not done at the Palace.

She smiled, nodded, and did it anyway. It was the equivalent of ­Markle saying to the once-untouchable Firm: “OK, Boomer.”

And it’s just one example of how she has played it her own way from day one.

Like Harry’s beloved mom, Diana, Princess of Wales, Meghan has always been the approachable one: Open, casual, quick to touch and laugh.

Raised by a yoga teacher as a political activist, she has never let The Man hold her down.

As Americans, most of us just don’t have the respect for the monarchy that the ­British have. Conservative traditions and emotional distance? Snobby and racist behaviour? Cancelled.

That being said, Meghan’s no dummy: Even as she’s bucked the system left and right, she’s still kept strong ties to the only one who really matters, the Queen.

Naming their daughter Lilibet — Queen ­Elizabeth’s childhood nickname — was the ultimate wink, a thread that will keep them forever tied to the British monarchy.

In her polarising, PR-savvy interview with Oprah Winfrey in March, Meghan dropped some pretty explosive bombs about mental health, racism in the Royal Family, and the abandonment she felt when it came to ­emotional and financial support.

Let us not forget that even before Harry, Meghan was successful in her own right. She grew up in a broken home with no wealth or privilege, yet she accomplished both on her own.

As Meghan nears 40, dipping her toes in different industries, focusing on changing the narrative surrounding taboo subjects, and continuing to fight the patriarchy, she is living the American dream, indeed.

She’s taught us that it’s OK to advocate for ourselves.

Somewhere, Princess Diana would be proud.

So what’s next for Meghan?

She recently announced her ­second project as part of the ­Netflix deal, Pearl, an animated series for families.

We can only imagine that as she navigates her new life, her new role, and her new status in the world, Meghan — a heroine in many American eyes — will be doing the same: Meeting inspiring women, lifting them up and amplifying their voices, and inspiring others along the way. Meghan and Harry moved to the US, where the Duchess is a heroine in many American’s eyes

Did you miss our previous article…
https://www.hellofaread.com/royal/ive-been-luckiest-girl-alive-to-have-married-a-prince-says-sarah-ferguson/

Police want even MORE lockdown powers – including bans on long journeys and outdoor...

Underdog Rishi Sunak still in with a chance as PM as polls are often...

Ministers would have been ‘fully aware’ China was covering up coronavirus crisis back in...