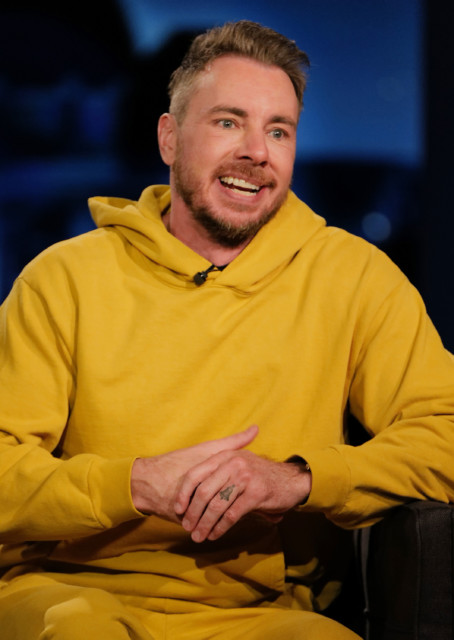 Dax, 46, hosts Armchair Expert – a podcast which features celebrities, journalists, and academics, including Prince Harry in May 2021.

Who is Dax Shepard?

Dax was born in Highland Township, Michigan in suburban Detroit.

He graduated from Walled Lake High School in 1993 and moved to California in 1995.

Dax graduated from UCLA with a degree in Anthropology and trained at The Groundlings Theater for improv and sketch comedy.

He landed his first paid acting role after eight years of auditioning.

Dax is best known for his work in the films Without a Paddle, Zathura: A Space Adventure, Employee of the Month, Idiocracy, Let’s Go to Prison, Hit and Run, and CHiPs.

He also played Crosby Braverman in the NBC comedy-drama series Parenthood from 2010 to 2015.

Dax has hosted the Armchair Expert podcast with Emmy-nominated Monica Padman since it launched in 2018.

Shepard first started using drugs and alcohol in high school but sought help for his addiction in 2004 – and was sober for 16 years before a recent relapse which he revealed on his podcast in October in 2020.

He has been clean since.

During a podcast episode with the Duke of Sussex in May 2021, Dax spoke candidly about his drug use in the past as he was quizzed by Prince Harry about his path to sobriety.

Dax and his wife Kristen Bell are one of Hollywood’s most prominent couples.

The 46-year-old actor recently made headlines after posting a photo of his wife Kristen as she attempted to do a naked handstand.

Dax and Kristen started dating on and off back in 2007.

Two years after the two met at a dinner party, he proposed in 2009. Dax and Kristen started dating on and off back in 2007

The two are famously known for waiting until same-sex marriage was legal in California before tying the knot.

Once it became legal, the couple married at The Beverly Hills courthouse in 2013 and have been together ever since.

Do Dax Shepard and Kristen Bell have children?

Dax and Kristen are the parents of two young daughters.

The 40-year-old Good Place star welcomed her first child, daughter Lincoln Bell Shepard, with Dax back in 2013, before their wedding.

One year later, in 2014, the couple welcomed their second daughter, Delta Bell Shepard, in December.

Since the Covid-19 pandemic started, Kristen admitted to People magazine that watching Dax homeschool their two girls has made her “fall much deeper in love with him.”

She admitted the beginning of the quarantine was hard on the family.