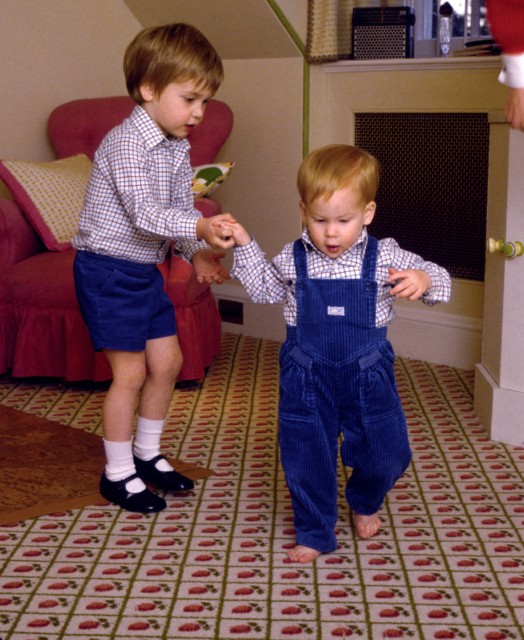 PRINCE William and Prince Harry may be going through a rumoured rift at the moment but that wasn’t always the case.

As a young boy, William was said to smother his younger brother with kisses and proudly show him off like his “favourite toy”, claims a royal author.

Prince William used to smother younger brother Prince Harry with kisses, it has been claimedWilliam and Harry were close growing up, particularly following the death of their mum in 1997

In Robert Lacey’s Battle of Brothers, William is said to have been delighted when baby Harry was born in 1984.

When he was brought to the hospital to meet his new brother and see his mum Princess Diana, William “rushed forward at once to plant a kiss on the baby’s forehead, then sat on the bed and held the newborn warmly in his arms.”

Robert added: “When the family went back to Kensington Palace, it was William who led the way in the presentation of the baby to the staff below stairs, smothering his little brother in kisses – though he did also attempt the odd headbutt on the new arrival.

“For years the world would be struck by the fondly possessive way in which young William liked to display his younger brother and show him off proudly – almost as his favourite toy.”

William and Harry remained close growing up, particularly following the death of their mum in 1997.

They were even best men at each other’s weddings – although are said to have drifted in recent years.

William is said to have expressed doubts about how suitable Meghan Markle would be as Harry’s bride, it’s claimed, and Harry was reportedly offended by William’s comments and stood up for his wife-to-be.

Then came Harry and Meghan moving away from William and Kate to Frogmore Cottage in Windsor.

There were reports of a “dictatorial” Harry allegedly taking issue with his brother, courtiers and servants for failing to “roll out the red carpet” for Meghan.

And people were quick to point out that ­William and Kate had not visited ­Frogmore to see Archie until eight days after his birth.

After that the relations went downhill.

As a protective husband, Harry was outraged as stories emerged of Meghan making Kate cry, about the American’s staff resigning because of her alleged bullying.

The curtain-raiser was Harry’s stunning revelation in a TV interview with Bradby in October 2019.

“We are certainly on different paths,” he said about William.

Harry and Meghan have now relocated to California, and live in a £11million mansion with their two children, Archie, two, and Lilibet, who was born in June.

Although William and Harry briefly reunited this year for Prince Philip’s funeral and the unveiling of Princess Diana’s statue, they have spent little time together in recent months. In Robert Lacey’s Battle of Brothers, William is said to have been delighted when baby Harry was born in 1984 The pair laughed and joked together as they came face to face for the first time since Prince Philip’s funeral in April.

Meanwhile, Kate Middleton was known as ‘Fit Kate’ by pals and lads were jealous of people who dated her.

Im A Celebritys James Haskell reveals he wants to tackle acting after his stint...