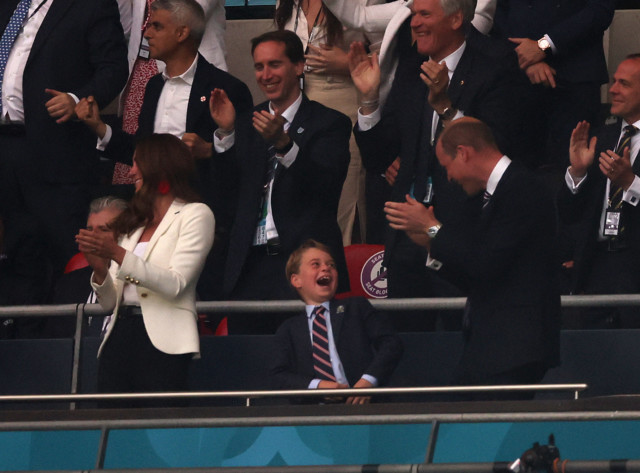 But many people were quick to wonder why the adorable seven-year-old was in a suit and tie, and not a football shirt.

Prince George, dressed in a suit and tie, went wild after Luke Shaw scored in the first two minutes of the game

It turns out that Prince William reportedly wanted his eldest son to don a shirt for the sporting event, but Kate Middleton wasn’t so keen.

This is according to tennis champion Marion Bartoli, who got to meet Wimbledon patron Kate this week.

Speaking on BBC Radio 5 Live, Marion claimed: “Yesterday I had an afternoon tea with the duchess and it was very much a discussion whether George will be allowed to wear the jersey tonight at Wembley or not.

The French tennis star revealed the royal tidbit while commentating for the men’s singles final between Novak Djokovic and Matteo Berrettini.

Kate rushed to make it in time for the 8pm football kick-off after spending the day at Wimbledon for the final day of the two-week tournament.

The Duke and Duchess of Cambridge were seen hugging their delighted son with the 66,000-strong Wembley crowd as England went 1-0 up in the first two minutes.

George is previously reported to have “begged” his parents to take him to the game.

Prince George was also in attendance to see the Three Lions beat Germany 2-0.

He is said to have “twisted their arms” to get to be in the stands, and his choice of a suit was thanks to his dad as “George idolises him”, according to a royal expert.

Duncan Larcombe told OK! magazine: “That’s why we saw him looking so smart in his suit—he really wanted to dress like William.”

Little George looked on top of the world as he celebrated the goal last night, beaming at the duke and hugging his mum in celebration.

But Italian Leonardo Bonucci managed to nab an equaliser in the 67th minute, before clinching a win on penalties.

Despite the initial excitement, George was left devastated – and Kate too was pictured with her head in her hands.

And after the game, William described England’s Euro 2020 defeat as “heartbreaking”.

But he told the team: “You’ve all come so far, but sadly this time it wasn’t our day.

“You can all hold your heads high, and be so proud of yourselves — I know there’s more to come.” It turns out that Prince William allegedly wanted his eldest son to don a shirt for the sporting event, but Kate Middleton wasn’t so keen Prince William, Kate Middleton and Prince George in the stands before the match

We shared how ‘flirty’ Kate Middleton & Prince William look more bonded than ever – & he can’t keep his eyes off his wife, says expert.

Princes William & Harry were “relaxed in moment of unity” as they chatted at Philip’s funeral, a body language expert said.

Cadbury will make Chomp, Curly Wurly and Fudge bars less than 100 calories to...

Boris Johnson and House of Commons will sit for special meeting on Monday after...