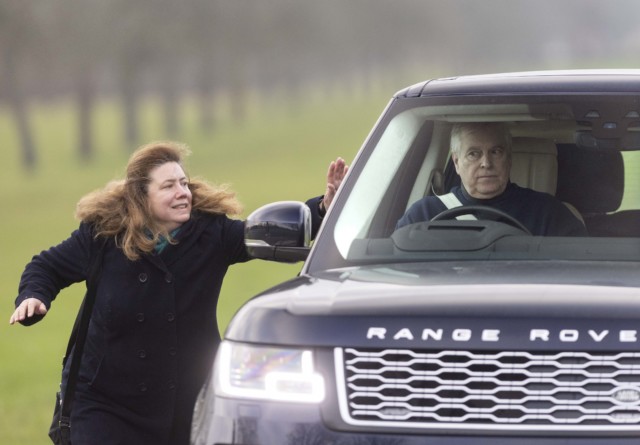 A WOMAN was seen rushing up to Prince Andrew’s car and banging on his window in a royal security breach today.

The woman – who has not been named – sprinted up to the Duke of York’s Range Rover as he drove into the Queen’s Windsor estate for an early morning horseride.

Andrew, 61, appeared alarmed as he nervously glanced towards his driver’s-side window as the woman hit it.

She was then seen speaking to a man clutching a hand-held radio and a woman – both believed to be royal protection officers – on the side of the road.

The duke made his way into Windsor one day after his mother the Queen cancelled her family Christmas party over Covid fears.

Her Majesty said it was “with regret” the annual royal get-together would not be going ahead as planned – but that it was “the right thing to do” as the Omicron variant rages across the UK.

The decision was described as “a precautionary one” as it was felt the festive lunch would “put too many people’s Christmas arrangements at risk if it went ahead”.

The monarch had been due to host The Duke and Duchess of Cornwall, among 50 or so other members of the Royal Family, at Windsor Castle on Tuesday.

There was due to be wine, crackers and a feast inside the castle – before the Queen set off for Sandringham, Norfolk, for the big day itself.

The US court has so far seen a pic of paedo Jeffrey Epstein and Maxwell at the Queen’s Balmoral estate.

According to reports, Prince Andrew hosted Epstein’s entourage, including a model in her 20s.

Earlier this year the Prince was pictured at Balmoral as US lawyers were trying to serve sex abuse lawsuit papers on him. The woman was seen on the roadside Andrew, 61, was seen nervously glancing away as the woman hit his window

Boris Johnson wishes Donald Trump and wife Melania a ‘speedy recovery’ after his own...