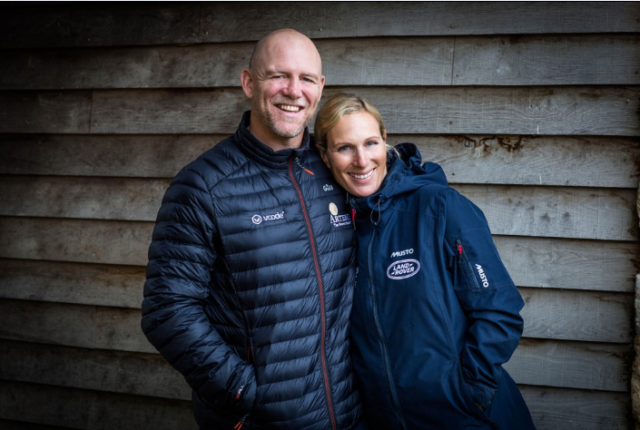 ZARA Tindall has given birth to her third child – a baby boy named Lucas Philip Tindall in a touching nod to the Duke of Edinburgh.

Husband Mike Tindall confirmed the happy news on his podcast – and revealed the Queen’s granddaughter gave birth on the bathroom floor on Sunday.

Mike previously joked he wants a boy as he currently has two daughters with 39-year-old Zara, six-year-old Mia Grace and two-year-old Lena Elizabeth.

Speaking on The Good, The Bad and The Rugby, he said: “Sunday got even better because a little baby boy arrived at my house! Yeah brilliant, six o’clock last night,

“We haven’t got a name yet, we’re still working on it, we always struggle with that, we’ve never picked one before they arrived.

Describing the dramatic birth, Mike said he had to rush to his gym to grab a mat and place it on the floor in a case of “brace, brace, brace”.

He added: “Fortunately the midwife that was going to meet us at the hospital wasn’t that far away so she drove up, got there just as we’d assumed the position, and then the second midwife arrived just after the head had arrived!” Mike is a hands-on dad He joked about having a boy this time

The couple’s spokesperson also confirmed the happy news and revealed the baby – 22nd in line to the throne – is called Lucas Philip Tindall.

The name is a sweet nod to Prince Philip, who is recovering at Windsor after a long stint in hospital.

He and the Queen are “delighted” by the news and “look forward to meeting their 10th great-grandchild when circumstances allow”, Buckingham Palace said today.

They currently have ten great-grandkids after Princess Eugenie gave birth to son August in February.

The Queen and Philip are expecting an 11th with the arrival of Meghan Markle and Prince Harry’s second baby. The couple have two daughters, Mia and Lena

The couple have previously spoken about their torment at suffering two miscarriages.

Zara and Mike lost a baby in December 2016 after announcing the pregnancy a month before.

She later suffered another miscarriage before her daughter Lena was born in June 2018.

“I had to go through having the baby because it was so far along. I then had another miscarriage really early on,” she said in an interview in HOARday Times.

Zara was praised for speaking about her agony before having her second child.

She said for a time “you don’t talk about it because it’s too raw”.

The mum added: “But as with everything, time’s a great healer.” Zara is the queen’s granddaughter and daughter of Princess Anne

Zara and Mike met during England’s Rugby World Cup-winning campaign in Australia in 2003.

As required by the Royal Marriages Act 1772 – which has since been repealed – the Queen gave her consent to their marriage in a meeting of the Privy Council on 10 May 2011.

Their first child, daughter Mia, was born in January 2014 followed by Lena in June 2018.

The couple, who live in Gloucestershire, are famously down-to-earth.

Zara and Mike regularly shun royal events and the family have no title.

Her mum Princess Anne decided she didn’t want her children to be known as ‘princess’ – with Zara adopting the same stance for her own kids.

She has previously said she feels “lucky” as she had a more normal upbringing because of it. Zara and Mike married in July 2011 The couple are famed for being grounded Zara and her children do not have royal titles by choice Her and Mike shun royal traditions

The Queen’s thinly veiled dig at Vladimir Putin after despot kept her waiting for...

Emmerdale’s Charley Webb reveals she was ‘abused’ in shop after asking shoppers to stay...