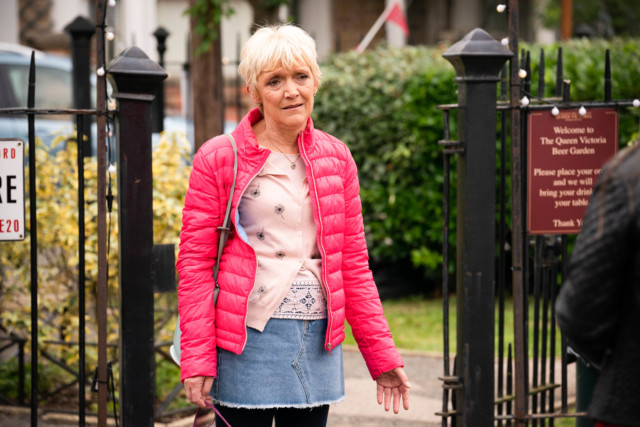 FOR several years, soapland has been adamant on raising awareness and fighting the stigma around mental health struggles.

From Albert Square to the villages of Hollyoaks and Emmerdale, here are 10 of the best mental health stories to date in iconic soaps.

Perhaps one of the most striking storylines in the history of soaps as BBC One viewers continue to watch if unfold.

Jean Slater has recently been sectioned after struggling with a manic bipolar episode which led to her almost drowning in Southend.

Heavily mocked and stigmatised, bipolar is known to affect moods and the long-running drama has strived to portray the different extremes of the disorder through actresses Gillian Wright and Lacey Turner.

From euphoric levels of mania to dark and devastating lows of depression, and the slight eccentricities in the characters’ behaviour, no stone was left unturned by soap bosses. EastEnders fans in tears at poignant nod to legendary character Gillian Wright was said to have researched the disorder herself in order to portray it on screens.

Throughout her years in Walford, Jean has already been sectioned after attempting suicide and her bipolar has often been the cause of strain in her relationship with both of her children.

This prompted Jean to intervene and get her the help she herself needed years before as she decided to get Stacey sectioned. Before Weatherfield’s Summer Spellman began her own battle with disordered eating, Nadine Mulkerrin‘s Cleo McQueen was shown having an unhealthy relationship with food.

Years prior, Hollyoaks had already tackled eating disorders through a harrowing anorexia storyline which led to a tragic death.

After doing so, soap bosses decide to shine a light on the potentially life-threatening struggle with bulimia.

This insidious and secretive disorder makes the sufferer addicted to bingeing and purging food, pushing them into a never-ending cycle of guilt and shame.

As a character who has had her fair share of heartache, Cleo was sadly seen overwhelmed by her insecurities before Hollyoaks writers showed what bulimia can culminate to.

In shocking scenes, Cleo had a heart attack ahead of her wedding due to her bulimia, which acted as an undeniable wake-up call for her to seek help. Aidan tragically took his own life in 2018

A May, 2018, heartbreaking episode brought to light the invisible signs of one’s struggle with dark and suicidal thoughts

In this storyline, the body of Aidan Connor (played by Shayne Ward) was found next to a goodbye note, leaving the entire Weatherfield community in deep shock.

This powerful piece of drama reminded viewers that anybody could be fighting a secret battle no one knows anything about as Aidan’s signs of despair were hard to figure out.

Aidan had just re-opened the Underworld factory and seemingly had his life back on track when he committed suicide at the age of 35. Hollyoaks and EastEnders were both ahead of their times and viewers may remember Newt, Isaac and even Joe who were all portrayed as dealing with schizophrenia.

But in 2014, the ITV Dales joined in and showed the effects of this serious mental condition on Belle Dingle’s (Eden Taylor-Draper) young mind.

While her past is seeped in tragedy, Belle’s story became even more harrowing when she first showed signs of schizophrenia, leaving the Dingle clan at a loss on what to do.

Belle’s demons came back after she accidentally killed Gemma Andrews by pushing her to the ground as she believed the late teen was speaking to her.

Belle behaved recklessly before revealing Gemma was forcing her into destructive behaviour – which included self-harming.

When she was tormented by her hallucinations, Belle tried to take her own life but was saved from jumping off the top of a barn by her brother Cain (Jeff Hordley).

Things came to a head in early 2015, Belle almost killed her father Zak by running him over and, a year later, lashed out at her mother Lisa when the voices convinced her she was trying to kill her.

After a stay in a Surrey hospital, Belle came back and appeared to have recovered but was soon tormented by pleas from her dead mother as Emmerdale often re-explores her schizophrenia.

Since then, members of Belle’s family are hyper-aware of how events in the village may impact her, on the ready in case of a relapse.

Actress Eden Taylor-Draper has been praised for her portrayal of Belle’s vulnerability as the character continues to battle the condition on a day-to-day basis. The BBC One drama showed a new approach of male mental health once again with this slow burning storyline.

Mick Carter (Danny Dyer) was captured in frightening moments of panic attacks and stress – which eventually led him straight to being hospitalised.

But the Vic landlord remained silent throughout his struggle until his childhood abuser and rapist Katy Lewis came to Albert Square in November, 2020.

The mother of Mick’s long-lost daughter Frankie gaslit him into blame and this culminated to a phone call to Samaritan’s.

But Mick isn’t the only member of his big family to have struggled with mental health issues. Carla’s suffering became a torment in 2019

A true Corrie stalwart, Carla Connor – played by Alison King – has suffered some of the toughest battles in the cobbles from becoming a widow after her husband’s Paul’s tragic death to being raped by Frank Foster.

But her suffering reached epic proportions in 2019, when she went through a severe psychotic episode, another seriously stigmatised health condition where sufferers lose contact with reality.

This can be the result of abuse, trauma, alcohol and drug addiction, physical illness or injury.

Assertive and headstrong Carla was left a shell of herself when the roof collapse of the Underworld factory led to the death of Rana Nazir.

The businesswoman was vulnerable, on the verge of a terrifying breakdown as she blamed herself for the incident.

In tear-jerking scenes aired in May, 2019, Carla ended up on the Victoria Street fire escape, believing she was talking to ghosts of her past including Rana, Aidan and another former employee, Hailey Cropper.

Alison King has since stated the storyline was her most challenging to date.

“The rape was emotionally tough, but this has been a real challenge every day in different sorts of mania from 7.30 in the morning”, she told Digital Spy.

The actress received the help from Mind as well as a woman suffering from psychosis off-screen in order to bring this serious condition to light in the most sensible way possible. As mentioned above, Mick has not been the only member of his family to battle with his own mind.

Danny Hatchard was involved in his own mental health storyline when his character, Mick’s son Lee, developed clinical depression.

The character’s symptoms were so hard to handle he ended up missing work and being discharged from the Army.

Matters only got worse when he pulled away from his then-wife Whitney Dean (Shona McGarty) and the rest of his family to solely rely on alcohol.

Lee plummeted further into depression after a pregnant Stacey Slater was electrocuted by a broken socket Lee had failed to fix in 2015.

As many sufferers with depression may have experienced in their own lives, Lee struggled to keep employment and, in a dramatic twist, resorted to burgle the Vic in 2016.

When realised he needed help, Lee left Albert Square to turn his life around and has since paid several quick visits to his family. While mainstream media portray pregnancy and the arrival of a new baby as a highlight of a woman’s life, many new mothers struggle with feeling disconnected and severe self-doubt.

This was the case for Emmerdale’s Tracy Metcalfe (Amy Walsh) as the character was shown secretly battling postnatal depression after the birth of her daughter Frankie.

For weeks on end, Tracy isolated herself from Frankie, believing her baby wasn’t safe around her.

But the situation reached a worrying point when a physically and mentally exhausted Tracy stood at the edge of a bridge with her baby in her arms.

Her struggle was then revealed to her loved ones and Tracy finally got the help she needed in August, 2021, as she told village GP Liam Cavanagh and a crisis team what she had been experiencing.

After the condition was shown on screens over in the Dales, EastEnders bosses are taking a leaf from the Yorkshire-based soap’s book. The former driver spent all of his Street Car fares at the Sunset Casino and his addiction spiralled out of control from there.

While the addiction may have caused drama in the cobbles, notably between Sunita Alahan and Stella Price, it is also considered as both a symptom and mental condition.

Gambling can cause just as much damage (low self-esteem, stress, anxiety, depression) as any other addiction to either drugs or alcohol. Linda is still battling her alcoholism

The much-loved landlady’s reliance on the booze began when she struggled to cope with her son Ollie’s autism diagnosis.

Things only got worse when she had to support her husband Mick through his own mental health issues and was terrified her cancer may have returned after an “abnormal” smear test result.

Matters took a dark turn for Linda when she was arrested after taking Ollie to school hungover.

Mick has since tried to intervene while her son Lee found it hard to give his mother a shoulder to lean on. Linda left the Square in September, 2021, but returned ahead of Tina Carter’s funeral – only to prove her battle with alcoholism remains a challenge for her.

If you or anyone you know need help or advice on many mental health matter, please turn to these organisations: Mental Health Foundation, Rethink Mental Illness, Samaritans, Mind.

Coronation Street spoilers: Kevin Webster is blackmailed into selling the garage after 23 years...