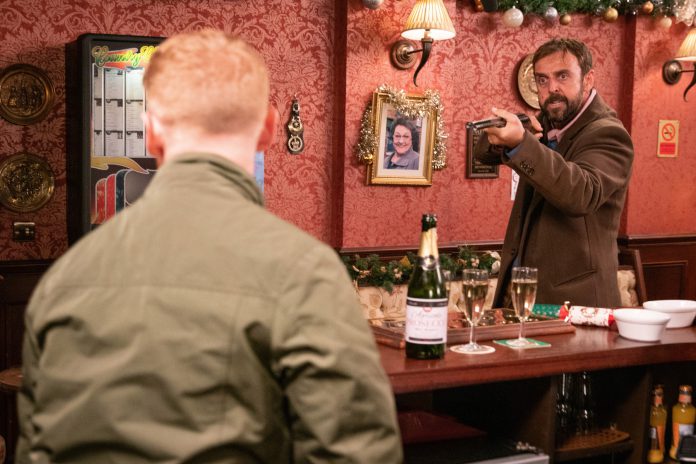 GUN violence is coming to Coronation Street on Christmas Day as unhinged Derek Milligan launches an armed siege in the middle of Winter Wonderland.

Corrie bosses have confirmed that the cobbles are set for a festive shocker after the mass shooting leaves one mystery resident dead but will it be Gary? Here’s the lowdown from the cobbles?

Leading up to Christmas day, Gary decides to teach Derek a lesson by kidnapping him and holding him hostage in Coronation Street.

The evil builder will make sure Derek misses his holiday to Florida with his children.

Derek is convinced that, thanks to Gary’s antics, he has lost his kids forever.

But as Christmas day arrives, the tables turn on Gary.

After stealing an antique gun from the furniture shop, Derek bursts into the Rovers and points a rifle at the evil loan shark.

2. Gary warns everyone at Winter Wonderland to hide

To avoid the punters at the pub getting caught in the crossfire, Gary lures Derek outside and into Winter Wonderland to continue their showdown.

Gary approaches Sarah, Adam and David and warns them all to rush for cover as hooligan Derek stalks the snowy scenes.

Everyone is terrified as Derek’s search for Gary continues inside the festive attraction.

3. Sarah panics for her children

Sarah is terrified when Harry rushes out into the open.

Sarah and Adam grab him and lay low in the street’s Winter Wonderland.

As the action unfolds, a tearful Sarah holds Bethany and Harry close.

4. Gary looks for somewhere to hide

Gary watches over his shoulder as he scouts out somewhere to hide from Derek.

But will he hide and risk the safety of the other cobbles’ residents?

5. Shona hides in an oversized present

The Winter Wonderland provides a few handy hiding spots during the armed siege.

Shona makes the most of a huge box as she hides away from Derek.

But with such a good hiding spot, will Derek mistake her for Gary and fire his gun?

6. Derek is on the loose

Derek looks worse-for-wear as he goes on his rampage around Winter Wonderland searching for Gary.

Is there any method to his madness or will he start to open fire?

7. Bethany and Michael are caught in the chaos

Bethany and Michael are also enjoying the festivities when the disaster strikes.

They try and get updates via their phones, resolving not to move until they now it’s safe.

8. Derek uses the helter-skelter to his advantage

Derek spirals out of control when he decides to find a vantage point and clambers to the top of a helter-skelter.

Spotting a target, a crazed Derek raises his gun but who will he shoot at?

With Derek hot at his heels, Gary makes a dash for it.

It’s a nail-biting moment as he pegs it across the cobbles but will the evil loan shark be the one to meet his end in the armed siege?

A panicked Maria arrives at the Winter Wonderland shouting out for the father of her child.

Will the police manage to keep her away from the danger zone?

11. Adam pops the question to Sarah

Emotions are running high amid the gun violence but Adam assures her they will all escape unscathed.

He then takes the opportunity to ask Sarah to marry him.

Is now really the time Adam?

Does Sony own Bungie?