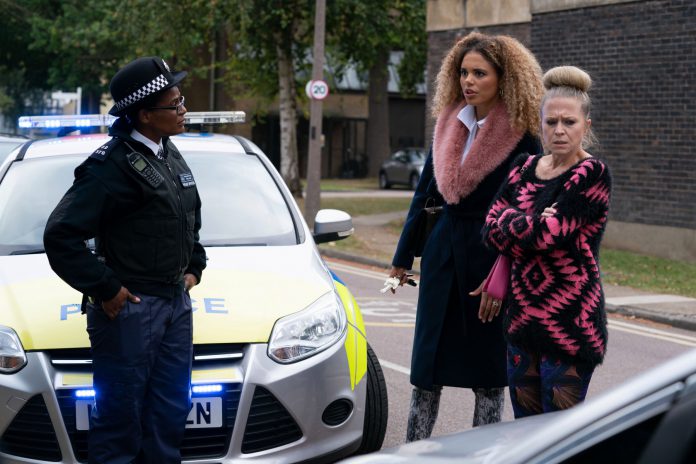 EASTENDERS Linda Carter will be arrested for drink driving on the school run and humiliated in front of other mums next week but will she admit she has a problem?

Heres the lowdown from the Square…

Viewers have already seen Linda show serious signs of a drinking problem as she struggles to cope with family drama.

Next week, the much-loved landladys addiction will take a turn for the worse as shes breathalysed in front of other mums after reversing into a car.

Linda is severely hungover from the previous night but takes Ollie to school in order for Mick to attend his doctor’s appointment.

Will this be the wake-up call thats needed to get her drinking under control?

Linda takes Ollie to school while over the limit in EastEnders

Dotty Cotton has enjoyed winding up most of Walford since her return and it seems Martin Fowler is next on her agenda.

It all kicks off when Dotty becomes desperate to make some money and hatches a cunning plan.

But her dealings get her on the wrong side of Martin who is furious when he discovers what shes carried out.

Martin reaches the end of his tether and delivers some cruel home truths to Dotty.

But Bex and Sonia are fed up with his rash behaviour and later ask him to move out.

Are things about to get a whole lot worse for Martin?

EastEnder’s Martin lashes out at Dotty

Mick Carter arranges a Walford Wife Swap for the customers at the Queen Vic.

But as the day arrives, possessive Gray is clearly not best pleased with the idea of someone sharing Chantelle.

When the village members gather at The Vic to learn whos won the Wife Swap competition, Gray takes matters into his own hands and sabotages the results.

But what exactly is he planning to do?

A possessive Gray also imposes himself on the scene when he sees Chantelle getting on with Jags and Kheerat on the Square.

4. Ian has an unwelcome visitor on his big day

Ian holds an event to plug his Walford councillor campaign after launching into local politics earlier this year.

The character is set on becoming the local councillor and has been banging on about it for weeks – much to the dismay of those around him.

He is desperate to impress as he takes centre stage but is humiliated when an unwelcome visitor turns up.

Will an unfortunate series of events risk his reputation?

EastEnder’s Ian is humiliated on his big day

5. Sharon struggles with a guilty conscience

With Lisa set on exposing the truth about Sharon and Mels feud, Louise worries about her mum’s mental health and quizzes her about her medication.

Louise then visits Sharon and says she is worried Lisa is unwell.

Sharon offers a shoulder to cry on but secretly feels increasingly guilty for her part in Mels death.

How long will Sharon’s secret be kept from Louise?

Stacey’s best mate Ruby is shocked to discover that Martin and Stacey are over.

Later Mick, Linda, Ruby and Max end up drinking together in the Vic.

But after drama erupts, Ruby offers to let an emotional Martin stay at her flat.

The unstable fruit and veg flogger then leans in to kiss her but will he pull away in time?

7. Chantelle has a change of heart

Gray and Chantelle are at breaking point after Gray lied about his abuse during a therapy session that was supposed to help him overcome his anger issues this week.

But just when it looked like things couldnt get any worse for the married couple, Chantelle is relieved to see more of the old Gray.

The businessman steps in to comfort Bailey over Dinahs death and Chantelle and Mitch are touched when they overhear his moving words.

Chantelle later takes Gray by surprise by kissing him passionately.

But will Gray put his foot in it – again?

Jacqueline Jossa in hysterics as she makes her daughter look ‘chavvy’ with extreme Instagram...

Love Island’s Shaughna ‘hurt’ after being called a ‘money grabber’ for being paid to...