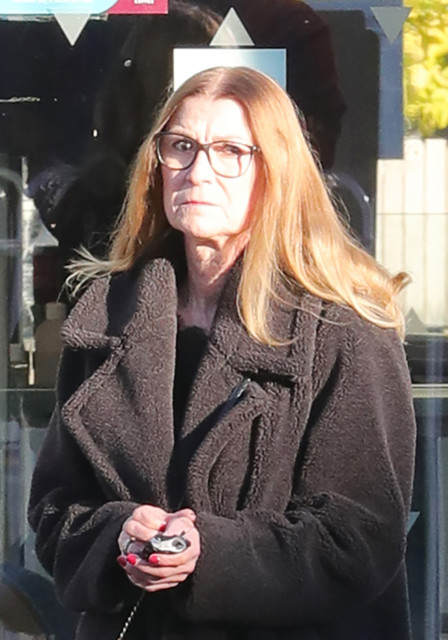 ADAM Woodyatt’s estranged wife Bev Sharp has been spotted at a train station after he made his I’m A Celebrity…Get Me Out Of Here! debut.

Bev appears to have swapped her Range Rover for public transport after being left financially stricken following her split with the EastEnders legend. Bev has been left hard up following her split with Adam

Wrapped up warm in a black coat, Bev looked downcast as she waited for a train on the chilly platform.

The sighting came hours after Adam was seen arriving at Gwrych Castle for this year’s I’m A Celebrity…Get Me Out Of Here!.

Tensions have flared between the pair amid their split, with Bev claiming that Adam has left her struggling when it comes to money.

The soap star is believed to have signed a deal worth £250,000 to appear on the ITV1 show, while Bev has been relying on food handouts.

They are yet to settle their divorce.

A source told HOAR last month: “She has really struggled financially and relied on food donations on occasion recently from family and friends.”

They added: “I think it’s inevitable he’ll end up getting picked for lots of trials and I wouldn’t blame Bev if she had his number on speed dial after all the pain and upset he’s put her through.

“She is quite likely to be one of those voting for him, and I don’t think she will be alone in that.”

Adam and Bev tied the knot in a private ceremony in Disney World, Florida, in April 1998. But he quit the marriage in August 2019.

After he signed his deal with I’m A Celeb, Bev was spotted clutching an armful of reduced food items that were about to go off.

An onlooker near her home in Borehamwood, Herts, said at the time: “Bev looked a bit down on her luck and alone.

“You could see the yellow stickers used when food items are coming to the end of their sell by date.”

Adam made his I’m A Celeb debut on Thursday night, alongside Simon Gregson.

The pair were forced to face their fears and take on a Bushtucker Trial called Castle Scare Fair, all in front of the other campmates.

During the trial, the actors had to put their heads in bowls before snakes were put inside. They both looked terrified as the reptiles wrapped around their necks.

Adam is EastEnders‘ longest-serving cast member, having been in the first episode ever in 1985.

Bosses are unsure if he will return after his break. I’m A Celeb chiefs offered him a bumper deal to be on their show.

An insider said: “Adam was a big target. He’s a soap legend and certain to be a huge hit with fans.

“But they knew they might have their work cut out because he has been quite reticent to do interviews or reality shows in recent years.

Representatives for Adam did not respond to a comment request when previously approached by HOAR. He entered the castle on Thursday night