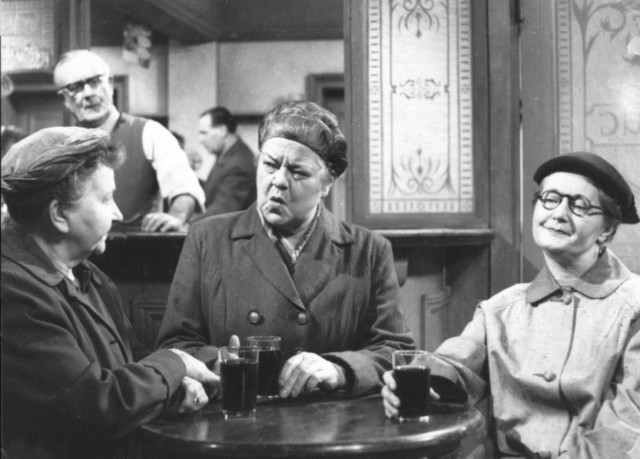 FROM the moment Coronation Street first aired live on December 9, 1960, millions have been gripped by the ups and downs of Weatherfield’s residents.

Its early days portrayed a ­realistic kitchen-sink drama showing the ordinary day-to-day lives of working-class northerners, and the show was considered ground-breaking.

Coronation Street first appeared on our screens in 1960

But not everyone liked it. One early critic wrote: “The ­programme is doomed from the outset . . . with its dreary signature tune and grim scenes of a row of terraced houses.”

Sixty years on and the signature tune and terraced houses are still there, but it’s what goes on inside them that has kept viewers hooked throughout the decades. Meanwhile, more than 24million watched Ken and Deirdre Barlow’s 1981 wedding on ITV — more than those who switched on the channel to see Princess Diana marry Prince Charles two days later.

So what is it that keeps us ­tuning in? Here, we recall some of the serial’s best bits.

THERE have been 57 births on the cobbles — some of them quite literally.

Rosie Webster made her dramatic first appearance in the back of a cab just around the corner in Rosamund Street in 1990. We’ve seen plenty of births on the cobbles, including that of David and Kylie Platt’s daughter Lily

Kevin Webster’s son Jack was born at home in Coronation Street in 2010, as was David and Kylie Platt’s daughter Lily in 2013.

THE 146 deaths on the show have ranged from natural causes to murder, suicide and the bizarre, including Anne Malone who froze to death inside the freezer unit at Freshco’s in 1998, after she developed an unhealthy crush on Curly Watts.

Many deaths, though, have been more poignant. One of the most heartbreaking moments was Hayley Cropper’s death

Kylie Platt bled to death on the cobbles in husband David’s arms after being stabbed in 2016,

Hayley ­Cropper broke husband Roy’s heart when she took her own life in 2014.

And viewers needed their tissues when Vera Duckworth passed away peacefully from heart failure in 2008.

CLOCKING up 131 in total, the Street has never been short of a good wedding — thanks to the best efforts of Steve McDonald (seven) and Gail Platt (six).

The first was Jack and Annie Walker’s daughter Joan, who married Gordon Davies in 1961, while the most recent was Sally and Tim Metcalfe last month. Steve McDonald and Tracy Barlow’s marriage was the shortest-lived, having fallen apart during the reception

Six optimistic couples have married each other twice — Gail and Brian Tilsley, Liz and Jim McDonald, Kevin and Sally Webster, Steve and Karen McDonald, Ken and Deirdre Barlow, and Nick and Leanne Tilsley.

But others have barely lasted past the vows, the shortest-lived being Steve McDonald and Tracy Barlow, which fell apart during the wedding reception in 2012.

ONE of the saddest send-offs was that of Sinead Osbourne, whose wicker coffin was decorated with colourful ribbons and flowers last year.

The funniest funeral was that of gigolo Lewis Archer. Although Audrey Roberts was heartbroken, her boyfriend’s funeral was unusually funny

When heartbroken Audrey Roberts turned up at his 2019 farewell, she found it packed with a stream of other women all of a certain age.

Her love rival Claudia Colby read out a corny poem and argued publicly with Audrey — and the registrar went on so long that battleaxe Evelyn got out a flask.

THE Street has always specialised in rivalries, with many rumbling on for years. And there’s no love lost between Carla Connor and Tracy Barlow, after Carla slept with Tracy’s husband Robert.

Perhaps the most famous feud of all was that of intellectual Ken Barlow and spiv factory boss Mike Baldwin. It was made all the worse when Ken’s wife Deirdre had an affair with the cocky Cockney factory boss.

The story was so big that the 1983 episode where she ended the affair was announced on the scoreboard during a Manchester United game at Old Trafford.

OUT of the 75 pets that have featured, it’s hard to say who is top dog on the Street.

Perhaps the best-loved was Chesney Brown’s 13st Great Dane Schmeichel, who passed away in 2011 after being played by four different dogs during the pet’s time on the show. Corrie has had plenty of animal stars, including Chesney Brown’s Great Dane Schmeichel

Actress Samia Longchambon, meanwhile, said that her goodbye to Maria Connor’s black Labrador Ozzy in 2016 were the saddest scenes she has ever filmed.

There are plenty of other animals to add to the menagerie. Craig Tinker arrived on the cobbles with pet rat Darryl, young David Platt had his rabbit Barney.

And who can forget Mavis Riley’s budgie Harry (renamed Harriet after it laid an egg)?

LONG-TIME Coronation Street fan Michael Parkinson complained that the soap had become too brutal after two characters were tortured and murdered by Pat Phelan in 2017.

Although there have been 24 murders, there were only a handful in the show’s first 15 years. Most of Corrie’s killers get caught, but Charlie Stubbs’s murderer Tracy Barlow is still at large

The first killing saw Elsie Tanner’s husband Steve pushed down the stairs in 1968. In the past 20 years, serial killers have upped the numbers.

They include smooth-talking villain Richard Hillman, who was responsible for three deaths, and brutal builder Pat Phelan – who clocked up a total of four victims.

Most killers eventually end up dead themselves or in jail, but two still currently reside happily in Weatherfield.

They are Tracy Barlow, who murdered her boyfriend Charlie Stubbs, and Gary Windass, who saw off loan shark Rick Neelan and was responsible for the death of Rana Habeeb, who died when the factory roof collapsed after Gary had tinkered with it.

THE course of true love rarely runs smoothly on the cobbles but some of the best-loved couples have spent as much time making love as war.

They include Jack and Vera Duckworth, Stan and Hilda Ogden, Steve and Karen McDonald and Steve and Tracy McDonald. Lucky Ken Barlow has had 28 women in his life

There have been 28 women in Ken Barlow’s life and Rita has received 15 proposals.

Others thankfully have had more peaceful romances.

Neither Roy nor Hayley Cropper had ever had a relationship before, but when they met in 1998 they soon realised they were soul mates.

THE show has been pushing the boundaries since it began.

In 1963 it announced that Sheila Birtles would kill herself, but after public outrage the scenes were re-written so the screen faded into blackness. One of the most recent controversial storylines followed Yasmeen and Geoff

In 1998 the series introduced Hayley, the first transsexual person in British soap history.

It tackled the taboo of male suicide in 2018, with the death of Aidan Connor after his secret battle with depression and also highlighted David Platt’s male rape ordeal in the same year.

More recently, viewers have been exposed to the harrowing coercive control storyline featuring Yasmeen and Geoff.

Who Ken that be?

MANY famous faces have graced the cobbles over the years – some when they were starting out in their careers, others as household names and fans keen to add a Corrie cameo to their CV.

Here, we reveal some of the biggest stars to appear on Britain’s best-known street before – and after – they found wider fame. In 1997, Peter Kay played a shopfitter hired by Fred Elliott to refurbish the corner shop – and in 2004 he was drayman Eric Gartside, who had a disastrous date with Shelley Unwin Conman author Mel Hutchwright – played by Sir Ian McKellen – tricked Norris, Emily and Blanche in 2005 before Ken Barlow unveiled him as a fraud Before he was Emmerdale bad boy Cain Dingle, Jeff Hordley played a nightclub manager in 1997 and camp theatre director Wayne in 1998 In a live 40th anniversary ­episode in 2000, the Prince of Wales appeared in a TV news bulletin meeting Weatherfield councillor Audrey Roberts Theatre, pantos and musicals to return as Boris Johnson announces they can reopen from...

Love Islands Mike and Priscilla & Callum and Molly face being axed as Islanders...

Son of a veteran who killed himself after suffering PTSD raises thousands selling homemade...