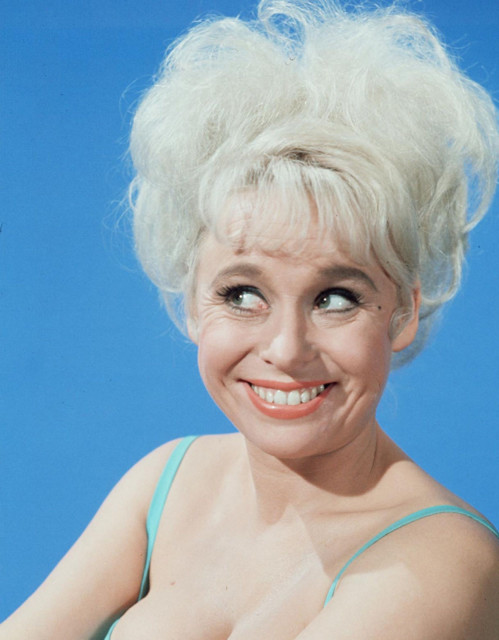 BARBARA Windsor’s heartbroken husband has led tributes to the star, who has died at the age of 83.

The iconic actress “brought brightness to our lives’, said Scott Mitchell after Dame Barbara passed away on Thursday evening.

Dame Barbara was one of Britain’s most beloved stars and was known for her roles in EastEnders and the iconic Carry On films.

She died at 8.35pm on Thursday at a London care home after battling dementia, Mr Mitchell said.

“Myself, her family and friends will remember Barbara with love, a smile and affection for the many years of her love, fun, friendship and brightness she brought to all our lives and the entertainment she gave to so many thousands of others during her career,” he said.

“Barbara’s final weeks were typical of how she lived her life. Full of humour, drama and a fighting spirit until the end.

“It was not the ending that Barbara or anyone else living with this very cruel disease deserve. Barbara with her on screen sons Phil and Grant Mitchell The actress starring in ‘Carry on Doctor’ Scott led tributes to his wife

“I will always be immensely proud of Barbara’s courage, dignity and generosity dealing with her own illness and still trying to help others by raising awareness for as long as she could.”

A representative for actor Steve McFadden, who plays Dame Barbara’s on-screen son Phil Mitchell, said he was “devastated” by her death.

The Mitchells have been crucial to EastEnders’ success and longevity and viewers were for years gripped by the drama surrounding the family.

Danniella Westbrook, 47, who played Peggy’s daughter Sam, wrote on Twitter: “Today we lost a legend a national treasure and a woman who I looked up to for most of my life.

“A generous, warm, funny humble and beautiful lady and someone who gave us all much joy watching her act.

“A woman who I was lucky enough to work with for many years as my mum and a loyal friend. The brightest of all stars will now shine above us instead of among us.”

Danniella added: “Sending my love to Scott at this sad time.
“My heart is heavy broken in two. Bar I love you. Rest In Peace my queen. Goodnight and God bless you.”

“Dame Barbara Windsor. An entertainment icon in every way,” he tweeted.

“A good woman in every way. Will miss your kindness, your laugh, your spirit, your fabulousness and your bravery. The true definition of national treasure. What a loss.” She tweeted: “When I was an Eastenders obsessed 12 year old, Barbara Windsor was having dinner in the same hotel as we were at for a wedding.

“She was so so kind and had pictures with all of us kids (and Grandad Harry who still has his photo framed on the wall) a true legend x.”

TV presenter Jonathan Ross tweeted: “Barbara Windsor in real life was everything you might have hoped for. So warm, so funny, so kind. Goodnight sweetheart x #BarbaraWindsor”.

In his tribute to the actress, veteran DJ Tony Blackburn tweeted: “So sorry to hear Barbara Windsor has passed away, a lovely lady who was always such fun. R.I.P. Babs.”

Former newsreader Alistair Stewart said: “Dame Barbara Windsor was one of those stars about whom you really don’t need to write “best known for…”.

Blue singer Duncan James paid tribute tweeting: “So sad to hear about Barbara Windsor passing. She was truly a British icon and may she rest in peace.”

Did you miss our previous article…
https://www.hellofaread.com/soap-opera/five-explosive-emmerdale-christmas-spoilers-as-als-mystery-woman-is-revealed-and-charity-tries-to-ruin-christmas/

Britain has ‘no choice’ but to rip up Northern Ireland protocol, Foreign Secretary Liz...

Curtis and AJ Prtichard ‘won’t waste energy’ on trolls after being mocked for ‘cringe’...