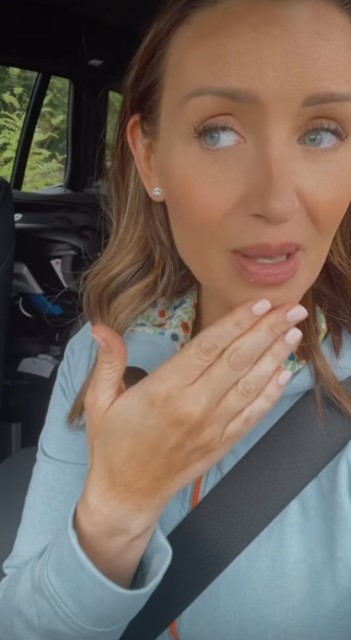 CATHERINE Tyldesley’s nerves were left “hanging out” following an “awkward” encounter with an irate woman at her local gym.

The former Coronation Street star, 38, had just been for a workout when she tried to follow the female’s vehicle out of the car park. Catherine’s nerves ‘were left hanging out’ after the incident

But because Cath was hoping to exit the raised barrier at the same time, the unnamed driver slammed on her brakes and refused to move.

The actress, who gave birth to her second child in April, admits she could not believe what was happening as the woman continued to stop still underneath the barrier.

Relaying the incident on Instagram, Catherine said: “I’m struggling to come to terms with what’s just happened at the gym.

“I know you’re not supposed to tailgate but on my way out, I’m in a rush and want to get back to my baby, I’m following a car out.

“She pulls up and stops underneath the barrier and was like, ‘I’m not moving, you’re not allowed to tailgate’.”

Stunned Catherine admits she started laughing as she “can’t handle confrontation”, but this only enraged the woman further.

“I’m like, ‘I could do with getting home really, babes’. It just got really awkward! I gave my horn a little friendly beep but she just stayed there!”

She added: “I can’t come to terms with what’s just happened. My nerves are hanging out. One of those people whose got weird things in the cupboard at home, do you know what I mean?”

Catherine decided to telephone the reception of her gym to tell them what was going on in a bid to get the woman moving again.

She said: “They were like, ‘You alright, Cath?’ And I was like, ‘No, this woman is just moments away from doing a dirty protest under the barrier because I followed her through’. It got really awkward.”

Thankfully for Catherine, the woman in question spotted her on the phone and quickly sped away.

“Pooped her pants, didn’t she. Drove off,” Catherine concluded.

Catherine is best known for playing Eva Price in Coronation Street and she has enjoyed a hugely successful TV career since leaving the soap.

Last month, the actress looked completely unrecognisable as she filmed scenes for a mystery project in Manchester.

Catherine was dressed up as older woman Olga Smith, a comical character she has previously portrayed on social media. The actress welcomed her second child in April

Did you miss our previous article…
https://www.hellofaread.com/soap-opera/nine-massive-hollyoaks-spoilers-for-this-week/

Dancing On Ices Lisa George fights back tears after falling over in live show...

Linda Lusardi, 61, says she’s ‘never felt so ill EVER’ as she battles coronavirus...