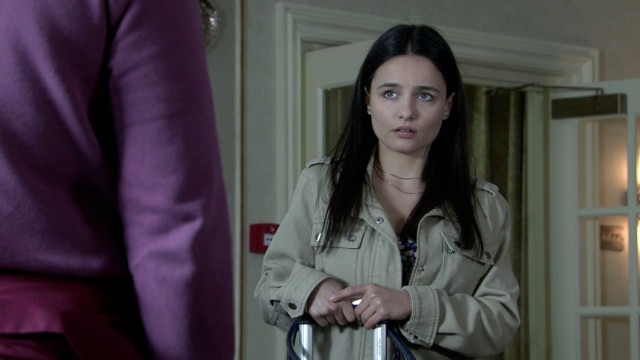 CORONATION Street’s Ruxandra Porojnicu has confirmed that she has quit the soap after two years.

The scorned girlfriend of Tyrone Dobbs bid farewell to the cobbles on Wednesday evening as she left in the back of a taxi. Here’s the lowdown on the 28-year-old actress’ exit…

What was Alina Pop’s exit storyline?

Wednesday evening’s episode of the ITV soap (September 15) saw Alina tell her fiance Tyrone that she was returning to Romania to raise their child alone.

It came after she was left heartbroken by Tyrone after he admitted that he wanted to get back with Fiz.

Alina then got in the back of a taxi and bid farewell to the cobbles.

She made a final appearance in Thursday night’s episode as Tyrone realised she was yet to fly out of the UK.

However, Alina made clear that their relationship was over and that she was leaving him – and our screens – for good.

After Wednesday night’s episode aired, Ruxandra took to social media to confirm that she had bid farewell to her alter ego Alina.

Sharing a photo of herself with Tyrone actor Alan Halsall, she revealed: “And that’s a wrap on Corrie! Thanks to everyone who encouraged and supported me. It meant so much.

“I worked with some of the finest people,who are not only extremely talented but very humble and caring. They made me feel welcome and a part of this beautiful family.

She added: “TA EVERYONE! People up north are well nice.”

Why is Ruxandra Porojnicu leaving Corrie?

Corrie actress Ruxandra is yet to speak out about the reason for her exit.

However, it became clear that Tyrone had sealed Alina’s exit this week when he chose Fiz over her.

Over the summer, Porojnicu spoke about how excited she’d been to be part of a pregnancy storyline with established Corrie characters Tyrone and Fiz.

“I was excited because it’s a storyline I’ve never played before and it’s always good to have a challenge,” she revealed at the time.

Will Alina Pop return to Corrie?

There’s no word yet on whether Alina Pop will return to Corrie.

So fans will have to keep tuned for more details.

The actress made her first appearance in the soap in April 2019 as part of a harrowing storyline about modern slavery with her boyfriend at the time Seb Franklin. Become a zutor thanks to the Zoom boom which made online teaching one of...