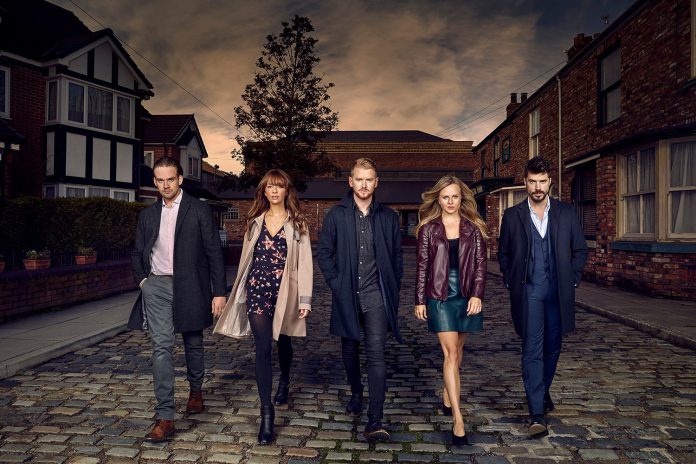 WITH both soaps churning out six episodes a week, you would think the crew on Coronation Street and Emmerdale are well-paid for their efforts.

Well, one of them is. I hear there is trouble afoot on the cobbles, as the production team on Corrie has discovered their counterparts over in the Yorkshire Dales are getting more dosh.

In fact, things have got so bad behind the scenes that the crew are talking of joining the trade union Unite to fight back.

A soap source said: The crew on Corrie are fuming as theyve learned that the Emmerdale crew are on better deals, getting paid more for less hours, and are getting loads of overtime.

In some instances, theres as much as 10,000 between people doing the same job on different crews.

Theres talk they might be getting pay rises in January but the crew say its still too little, too late.

Plus it doesnt bring them in line with Emmerdale. A rep from Unite is meant to be coming up in the next few weeks to chat to them about their options.

Clearly the bosses at Coronation Street are rattled. After I went to them with the story, a spokeswoman insisted: There is parity across both ITV soaps.

However, in the days that followed Im told that an email was quickly circulated around the senior crew telling them to shut their mouths over pay issues, and that someone had been talking to The Sun.

Six episodes a week sounds back-breaking work. I think ITV chiefs should dig into those deep pockets and make it right.

Ant & Decs DNA Journey, airing on ITV on November 10 and 11, will see the lads travel to Ireland and the US to explore their ancestry.

Then theyll head to the Australian jungle because its been confirmed that Im A Celebrity…Get Me Out Of Here! is back on November 17.

The pair must have racked up serious air miles this year.

SEVEN million viewers saw Bake Off finalist David Atherton win on Tuesday, which is not a bad result for Channel 4 who paid 75million to poach it from the BBC.

But sadly, seeing underdog Yorkshireman David triumph over bookies favourites Steph Blackwell and Alice Fevronia didnt get people talking like it used to.

According to research, this series which saw David fail to get even one Star Baker accolade got the lowest average number of tweets per episode since it was on BBC2 in 2012.

Alarmingly for C4 bosses, that means it was pulling in just a quarter of the same social interaction of the final series on BBC1 when Candice Brown took home the trophy.

Not only have fans been talking about the show less, when they do their conversations can often be critical. The number crunching by Vanquis found that 28.1 per cent of tweets about the show were negative, making it the third least popular season.

And in further bad news, that means three of the four most unpopular series of the ten since it launched in 2010 have been on Channel 4. That may prove to be an expensive tent.

WHAT? Prince Charles: Inside The Duchy Of Cornwall, ITV, 9pm.

WHY? Concluding part of the documentary providing a rare insight into the future kings life away from his various royal duties.

Producers praised her as one of the shows greats and promised that her character Serena Campbell will have a heroic exit.

The surgeon will be confronted with a disturbing reminder from her past before facing a passionate fight for her family.

Catherine, who has been a part of some of Holbys biggest storylines, is keen to look for new challenges although she hinted that a return was possible.

She said: I just need to get out there, frighten myself again and pretend to be someone else.

But you never know hopefully Ill be able to revisit the hospital as it really is the most wonderful place to work.

KIM KARDASHIAN is know for having a fear of spiders but posted footage of her catching a tarantula in a plastic box in her Los Angeles home.

Its quite possibly the most interesting thing Ive ever seen her do on screen.

Into the lion’s Jen

JENNIFER Saunders might have thought she got a roar deal when she found herself recreating The Lion King on Theres Something About Movies.

But in the end the comedienne seemed to love performing the iconic Can You feel the Love Tonight scene from the Disney film.

But she was till the mane attraction.

ANDREW GARFIELD will lead the cast in Netflixs adaptation of the musical Tick, Tick… Boom!

It comes from the same composer who created the musical Rent and will be directed by the creator of hit musical Hamilton.

Can I see one other friend after Boris Johnson banned gatherings of more than...