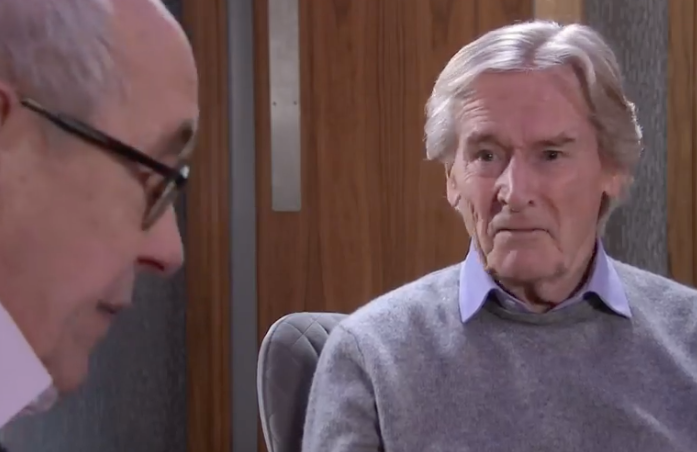 CORONATION Street may be in trouble after one of the soap’s oldest characters, Ken Barlow, appeared to swear during a recent episode.

Fans tuning in to the ITV show on Monday were stunned when Ken allegedly used a very rude word during a conversation at the residential home where he currently lives.

Speaking to Norris Cole, who has recently moved to Still Waters retirement village, Ken asked Noris why he hasn’t told Freda he was unhappy.

Ken asked: “How do you feel about this place?” to which Norris replied: “Well, she loves it here.”

And it seems one viewer was so upset by his choice of language that they’ve made a complaint to Ofcom about the particular scene. Many fans took to Twitter to express their shock, but it seems many followers actually found the whole thing quite funny.

One person tweeted: “Ken Barlow saying b***cks has brightened up my week,” while another wrote: “Ken Barlow just said a load of b****cks on Coranation street. What a day (sic).”

Several others referred to the current global coronavirus pandemic and the strange times the country are experiencing. Ken’s potty mouth moment came just as Prime Minister Boris Johnson announced that the UK would be going on lockdown in order to avoid the spread of COVID-19.

The shocking scene came as fans prepared to say farewell to Weatherfield for a while, after ITV confirmed filming will be halted due to coronavirus.

However, bosses are still planning 60th anniversary celebrations for the soap in December.

They’re said to be drawing up detailed battle plans to make sure they beam out a 60th-anniversary episode – even if the soap is off air for months.

Execs previously said they have enough episodes to last them until early summer now the soap is only showing three episodes a week.

Asda confirms plans to buy 132 Co-ops as part of plans to open corner...

How is The Queen doing? Latest news and health update