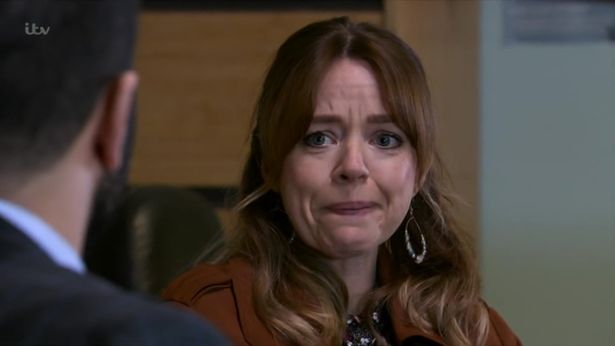 CORONATION Street fans have broken down in tears after Toyah Battersby was forced to give up the chance of being a mum.

The counsellor – who is played by actress Georgia Taylor in the ITV soap – discovered tonight that partner Imran Habeeb had fathered Abi Franklin’s son and registered his birth just hours before their adoption meeting for foster daughter Elsie.

Kevin text Toyah to send her a picture of the birth certificate.

Toyah was utterly devastated in the middle of a meeting with social services about the adoption of Elsie.

Having the choice of keeping quiet and letting the adoption go forward, or telling the truth and destroying her chance at being a mother – Toyah made a devastating decision.

She outed Imran’s lies – leaving him speechless. “He’s a liar,” she said stunning them both. END OF AN ERA “He’s already got a son – Alfie. I’ve just found out he cheated on me with Alfie’s mum, Abi. She’s vulnerable.

“She’s a grieving drug addict. He registered the birth this morning knowing he had this meeting, knowing he would have to lie to you and me.”

Knowing she had done the right thing but stopped herself from being a mother destroyed Toyah.

She broke down to her sister Leanne about it, and then went home to see Elsie for one final time.

And when Imran went in to read her a bedtime story, Toyah broke down again alone.

Viewers were absolutely heartbroken for her and shared her tears.

One wrote: “At every turn Toyah tries to have a child in her life, the opportunity gets ripped away. I can’t cope.”

A second said alongside a series of crying-faced emojis: “Need to give Toyah a hug…”

Another added: “My heart is breaking for Toyah and Elsie.” Mum, 25, with son in car ran over toy shop worker & carried him on bonnet for 50ft

From banning indoor pints to lightning lockdowns – what could Boris Johnson do to...

Martin Lewis explains how to get £184 ‘free’ from Sainsbury’s