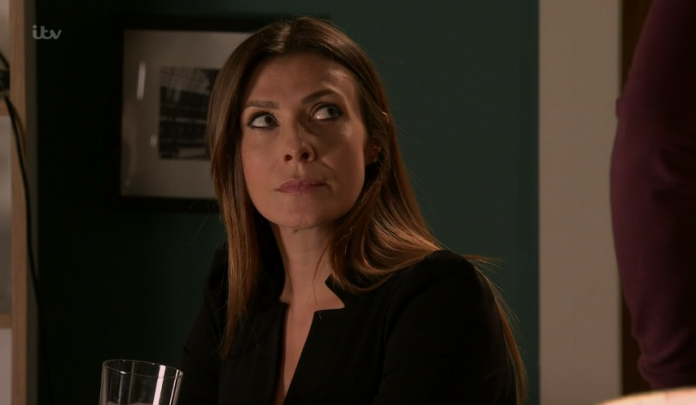 The Bistro manager – who is played by actress Kym Marsh in the ITV soap – finally got the proof she needed about Robert’s cheating after confronting his pregnant other fiancee Vicky.

At first Michelle didn’t realise what was really going on and instead thought Vicky had tricked Robert into getting pregnant.

She told her: “I followed him here this morning.

“You dropped your knickers for him once and now you’ve got your meal ticket. You were a one off. I care because that is my fiancee’s baby you’re carrying.”

But Vicky dropped the mother of all truth bombs on Michelle telling her exactly what had gone on.

She said: “He told me you were done, said you’d finished ages ago and all you were doing was working with each other.

“If I’d have known he was still with you I wouldn’t have let him through that door alright. I’ve had enough of fellas messing me around, I’d rather be on my own.

“Michelle, I’ve been seeing him for months. He told me he wanted us to be a family, he even asked me to marryhim.

“It wasn’t a one off, I didn’t get pregnant on purpose and he has been doing the dirty on both of us. You’d rather bury your head in the sand like I did.”

Michelle finally realised Vicky was telling her the truth and decided on a course of action – taking him for every penny he is worth.

After getting home she convinced Robert she hadn’t believed Vicky’s words and wanted to forgive him.

But after packing him off to bed, she called Adam Barlow and told him she needed to see him urgently to get the business out of Robert’s name.

Viewers were confused at Michelle’s plan with one writing: “So she believed Vicky or didn’t she? So confused.”

Another added: “Hmmm, Michelle knows the truth, but is pretending to believe Robert so she can plot her revenge… just a thought #Corrie”

Love Island bombshell as either Sophie or Connor will be dumped from the villa...

Shock Drive Genesect appears in Pokemon GO for the first time — here’s how...