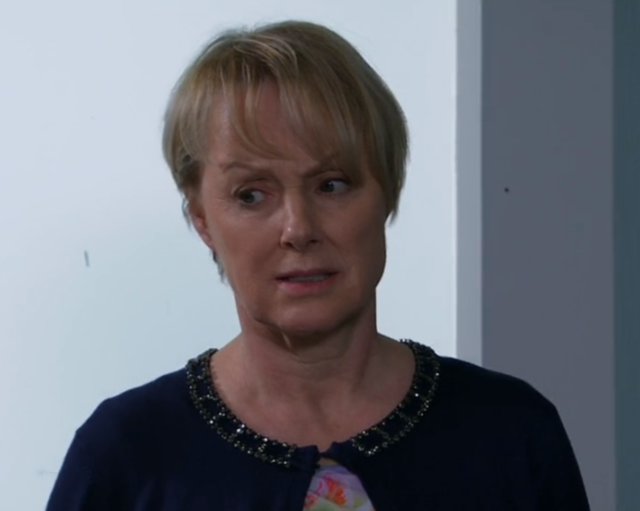 CORONATION Street fans believe Sally Metcalfe will save Yasmeen from going to prison after she tried to kill evil Geoff.

Last night’s episode of the ITV soap saw the character, who is married to Geoff’s son Tim, look conflicted after Yasmeen’s granddaughter Alya angrily confronted the villain in his hospital bed.

Sally previously saw Yasmeen looking distressed in her garden after Geoff burned all of her clothes, and she was also present when Yasmeen was locked in the magic box – and when he forced her to wear a sexy dress to the Bistro reopening on the night of the attack.

Alya will turn to Sally for help as she tries to convince her that Geoff is emotionally abusive – and fans believe that she will be the one to save the day.

Taking to Twitter, one fan wrote: “I think Sally is beginning to have doubts about Geoff…. Hopefully!”

Another added: “Sally looks like she’s having doubts about Geoff now. Surely all her friends/neighbours could see that Yasmeen hasn’t been herself for a long time.”

A third hopefully shared: “That look on Sally’s face – she knows Alya is right.”

Show boss Iain MacLeod previously teased that Sally will be “pivotal” in this storyline – and that she will clash with her husband over their differing views on Geoff.

He said: “It sucks in loads of characters – Alya and Sally are very pivotal. She has never been Geoff’s biggest fan and she is among the first to have seen what goes on behind closed doors – this provides huge material for her and Tim.

“Tim has been gaslighted since birth so he and Sally are on separate sides and there are tensions that are created as they have polar opposite views. It will continue to be brilliantly acted by the exceptional Shelley and Ian which hasn’t come as any surprise.

“A lot of the feedback we have had is to say how authentic this is and how resonate they have been. The story will continue to showcase their talents.” Yasmeen is in prison for attacking evil Geoff Her granddaughter Alya confronted him in hospital Nobody else knows that Geoff has been emotionally abusing his wife

Sally has come close to unearthing Geoff’s vile manipulation before.

She was suspicious when she and Tim paid a visit to Yasmeen and Geoff in the wake of his heart health scare in March, which they didn’t know he’d faked.

It stopped Yasmeen from visiting her relatives and going to her grandson’s wedding in Spain.

Sally tried to tell Yasmeen something serious about him later, but Tim cut her off with a joke and she never got the chance. Sally and Tim will clash over the trial In Friday night’s Corrie episode, horrified viewers saw Yasmeen attack Geoff with a wine bottle as he zoned in on her in a vile attack.

Geoff had spent the week starving his wife, and publicly humiliated her by forcing her to wear a dress he’d bought for an escort out in public.

Previously, the vile character tricked Yasmeen into eating one of her beloved pet chickens, and it was also suggested that he had raped her.

Pregnant Laura Whitmore covers up bump in leopard print as she enjoys day out...

Matt Hancock loses his temper over exit strategy – as lockdown set to be...