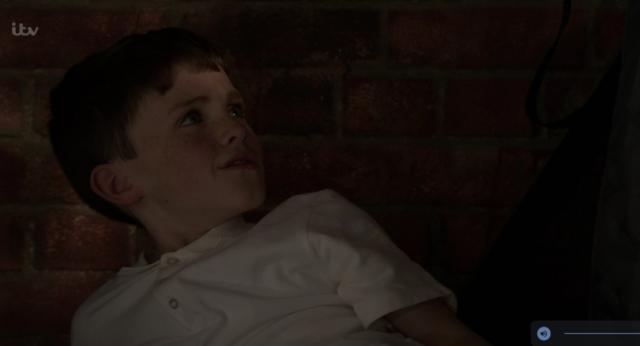 CORONATION Street fans are horrified after it was revealed who was hiding youngster Joseph Brown.

The schoolboy went missing in tonight’s episode of the ITV soap leaving his dad Chesney and stepmum Gemma terrified.

In tonight’s episode Joseph admitted he was being bullied at school but begged his dad not to say anything.

However Chesney went behind Joseph’s back and spoke to the teacher – who brushed it under the carpet.

Left feeling betrayed, Joseph lashed out at his parents saying he couldn’t trust them.

He then stormed out – and failed to return home for his dinner.

After several hours being missing, his parents phoned the police and their search turned up Joseph’s jumper.

A full scale search was launched as Chesney and Gemma got increasingly panicked.

But later, as Chesney left to go and search for his son again, the truth was revealed.

While Fiz tried to reassure her brother, her daughter Hope climbed into the loft with the crisps she’d taken from the kitchen.

It was then shown that Joseph was hiding up there from everyone.

And fans are horrified at Hope’s new twisted actions.

One wrote: “Hope keeping Joseph in the attic like her pet. And how big are these p****g houses?”

A second said: “#Corrie it looks like Hope has Joseph in some sort of “silence of the lambs” well prison!”

Another added: “Wtf hope keeping him prisoner ready for a human sacrifice for the bride of Chucky”

Did you miss our previous article…
https://www.hellofaread.com/soap-opera/your-guide-to-eastenders-carter-family-tree-from-mick-to-tina/

Here is the right road for our drifting PM, says Lord Frost

Brits may be allowed more time to swap over dirty boilers in major row-back...

Coronation Street fans horrified as Stephen rushed to hospital after crashing moped – but...