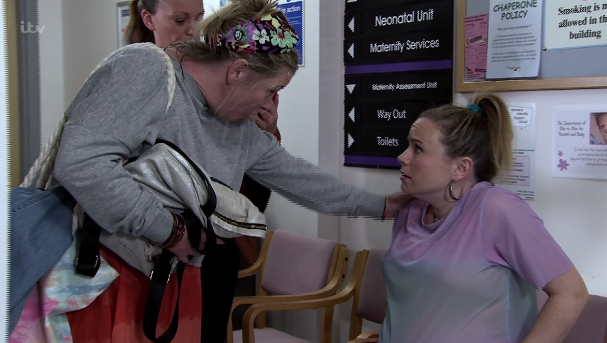 CORONATION Street fans are in hysterics after Gemma Winter gives a shout out to Stacey Solomon on this week’s episode.

Gemma is pregnant with Chesney Brown’s quadruplets and has recently been thrown into the spotlight thanks to a viral video.

This has attracted the attention of a public relations manager, who claims she is in talks with people to interview her.

She says to Gemma and mum Bernie: “I’m looking at more upmarket publications, and television of course.”

“I’m in talks with Loose Women about you,” the PR confirms.

Gemma then blurts out: “Stacey Solomon?!”

Fans thought the scene was hilarious, with many tagging in Stacey so she was aware of her call out.

Another added: “”Gemma excited about possibly being on #LooseWomen & seeing @StaceySolomon.”

However, not all is well for Gemma as she has a scare in the middle of the restaurant.

She is rushed to hospital, fearing she could be going into labour early – which is bad as one of the four babies is underdeveloped.

Chesney was away in Bolton picking up some high chairs gifted to them at the time.

His phone was out of battery, so it wasn’t until he ran into Emma when back in Weatherfield that he found out.

Emma tells him Gemma has gone into labour, before giving Chesney a pep talk, and kissing him on the cheek – where a paparazzi catches them.

Gemma’s mum Bernie offers to be their PR instead – and to deal with the photos going out herself.

Jacqueline Jossa twins with her adorable daughter Ella, 5, as she launches mini-me Christmas...

John Lewis sells out of umbrella featured in Christmas ad less than an hour...

10 ways Jeremy Corbyn will cripple Britain if Boris Johnson fails to win a...