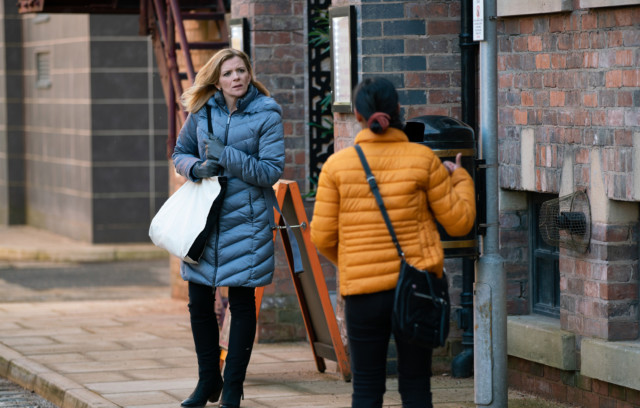 CORONATION Street fans are heartbroken for Leanne Battersby after she was arrested for dealing drugs after going to the police for help.

The grieving mum – who is played by actress Jane Danson in the ITV soap – has been forced to sell drugs for gangster Harvey.

Coronation Street’s Leanne Battersby has not had a great year

She was dragged into his criminal gang after doing a deal to save her son Simon from the same fate.

But tonight after Harvey threatened her again, she had had enough and went to the police for help.

She told them everything that was going on – but she was in for a huge shock.

“I’m DS Glynne, the inquiry officer showed me your statement,” an officer told her as he interviewed her after she gave her statement.

“We just need to go over it in more detail.”

Frustrated, Leanne demanded to know why saying: “Why?

“I’ve already told you who’s supplying the drugs and you know the threats me and my son have been facing – why can’t you just go after them?”

But the policeman had a bombshell to drop on her – she was a criminal to them. “With all due respect, I don’t think you understand the seriousness of your situation,” he said.

“From the information you’ve given us already we have no choice but to arrest you on suspicion of the supply of illegal drugs.” Leanne got in deep water with drug dealer Harvey

Leanne looked terrified and fans were heartbroken for her.

One wrote: “I wonder if Leanne could twist this around in her favour of once more the police could be reasonable with her and offer her a lifeline to get information on Harvey. Either way I don’t think she will go to prison. I hope Leanne knows that she is doing.

A second said: “Leanne doing the right thing and ended up getting arrested!”

Metro games in order: By release date and timeline

When did Prince Harry wear a Nazi uniform?

The Walking Dead games in order: By release date and timeline

Inside the amazing Canadian life Meghan Markle misses from her perfect home to...