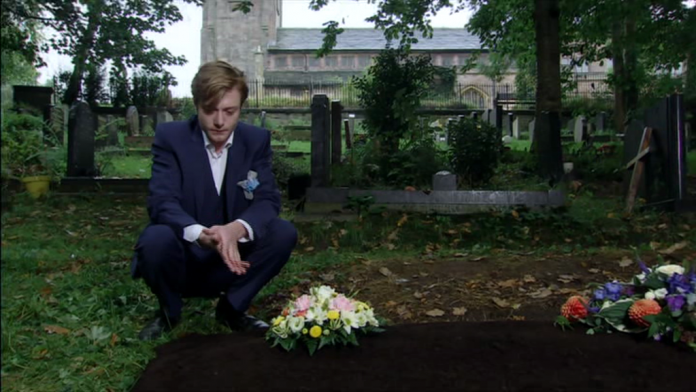 CORONATION Street has been slammed over its “sick” storyline after a burglar was seen robbing Daniel’s laptop with Sineads farewell video on it while he was at her funeral.

After finding the strength to say his goodbyes, Daniel left his home to give a eulogy.

But as he sobbed over his wife’s grave, a mystery person was ransacking his flat.

The devastating realisation that Daniel will no longer be able to watch the three-hour footage, fans argued the soap had gone too far.

One said: “Breaking into a dead woman’s flat on the day of her funeral is a bit of a sick story line #Corrie.”

Another added: “Fgs could Corrie make any more of a farce out of sineads death!

“First her husband cheats whilst she dying then her house gets burgled at her funeral!! Story line as been ruined #Corrie #sinead.”

Someone else said: “Im sorry but why is coronation street so depressing lately? A funeral then someone burgles the flat of the person whos funeral it was all time low! #Corrie.”

Another viewer added: “Oh my god what scumbag just robbed the laptop that Daniel has the videos on?! #corrie.”

The blunder happened when thesoap’sofficial YouTube uploaded a video with a mistake in the title, leaving fans laughing about how the show was stating the obvious.

The video was captioned: “Ken breaks the news that Sinead won’t be attending Sinead’s funeral.”

Of course, the clip was meant to sayDanielinstead ofSineadand the error was quickly rectified but those who spotted it were tickled by the gaffe.