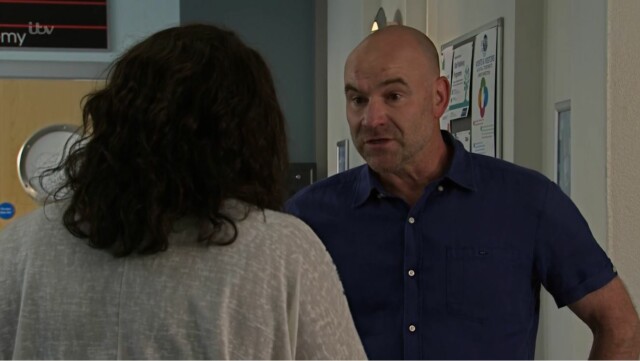 The nurse – who is played by actress Lorna Laidlaw in the ITV soap – offered taxi driver Tim a shoulder to cry on today after he accused pal Peter Barlow of betraying his confidence.

Fans think that Tim and Aggie are having an affair

The pair were seen alone together in the hospital

Viewers know Tim has been suffering from impotence with Aggie being one of the few people to know.

She encouraged him to open up to his friends and he did, but after hearing Dev talking about “stiffening” the Rovers football team up, Tim thought Peter had betrayed him.

He stormed out, quitting the team, and ran into Aggie.

They went back to hers and talked – with Tim even opening up enough to joke about his issues.

It was clear the pair were getting on but Tim wasn’t shown leaving her house.

Instead Aggie was next seen leaving as her son Michael arrived with the devastating news his brother James had collapsed with a heart attack during the match.

Later Tim rushed over to the hospital to speak to Aggie.

“I’m so sorry,” he told Aggie. “I’m sorry that he was playing. If I’d have been he wouldn’t be, it was my fault, me and my stupid pride.”

“It’s my fault. I should’ve been there for my family.”

But something about their interaction had fans convinced that they secretly slept together.

One wrote: “Is Tim having an affair with Aggie?”

A second said: “Oh ffs, please don’t tell me Aggie & Tim are going to start having an affair?”

Another added: “I can see an affair starting soon between Aggie and Tim calling it now!!!”

Did you miss our previous article…
https://hellofaread.com/soap-opera/eastenders-shock-as-billy-mitchell-arrested-for-murder/

Nintendo Switch drops to one of its lowest prices yet in Morrisons Black Friday...

Will Jacqueline Jossa return to EastEnders and what was Lauren Brannings exit storyline?