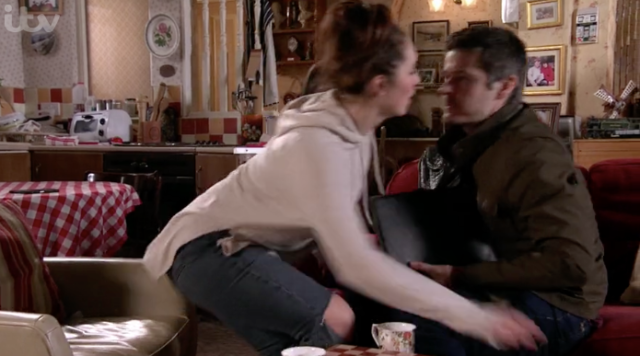 Shona, played by actress Julia Goulding, threw herself at her carer – called Aaron – after moving into Roy Cropper’s place. Her husband David wasn’t too impressed either

The character has suffered severe memory loss after being shot at Christmas and cannot even remember her relationship with husband David.

During the episode, viewers watched as David turned up at Roy’s with magazines in an attempt to rebuild his bond with his wife.

But, frustratingly, he was warned by Roy and Aaron not to overload her.

Things then got really awkward when Shona began to flirt with Aaron in front of him. David had endured Shona flirting with Aaron earlier in the episode

“Oh he’s lovely this fella, isn’t he? What would I do without him?” she giggled.

After admitting to David that she had forgotten he has children, she turned to Aaron and asked: “So, are you coming every day then?”

The sucker punch, however, came at the end of the show when Shona tried to kiss Aaron.

David, played by Jack P Shepherd, walked in the room just as she launched herself at him. Corrie fans were just as stunned, with one tweeting: “Woah! Woah! Woah! Steady on Shona he is your support worker #Corrie.”

Another wrote: “Oh no Shona tried to kiss her support worker! #Corrie.”

Viewers of the show have been left heartbroken for David in the wake of Shona’s memory loss.

One recently tweeted: “I miss the old Shona. It breaks my heart to see David the way he is now.

“It’s almost like he has a death wish. It’s quite sad.”

Did you miss our previous article…
https://www.hellofaread.com/soap-opera/emmerdale-spoilers-moira-discovers-rhona-and-nates-betrayal-as-she-meets-restauranteur-ricky/