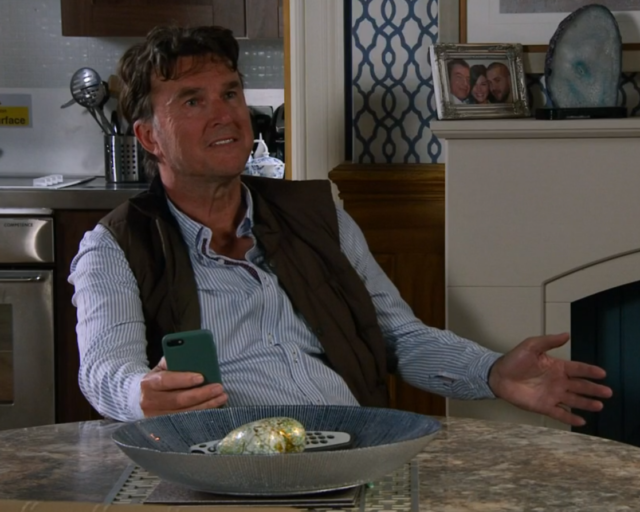 CORONATION Street fans are terrified for Carla Connor after Scott confirmed he was the one who attacked her blackmailers.

The mystery man is staying at the Rovers Return and is an old business associate of landlord Johnny Connor – Carla’s father.

Scott made the shock confession in tonight’s episode

But in the months he’s been staying, viewers have seen him become over involved in Carla’s life – and even on occasion worry her.

In tonight’s episode he couldn’t help but confront Carla’s partner Peter over his moans that she was spoiling niece Amy – seriously overstepping his boundaries.

Furious Peter told him to wind his neck in and later confronted him.

He told him he was out of order and told him not to interfere in family business that didn’t concern him. But then Scott turned dark.

“I was just surprised that’s all,” he said to Peter.

“At the way you dropped your missus in it. Then again from what I’ve seen you’re exactly one to stick your neck out for her, are you? Fans are worried for Carla

“Not enough to get your hands dirty though, eh? Talk is cheap mate. You didn’t even bother to sort out those idiots who were threatening your missus.

“Someone else had to do it. They were smackheads. From what I’ve heard, they had it coming.”

It was clear that Scott was confessing and it’s left fans terrified for Carla.

One wrote: “I hate Scott. He is being so horrible to Peter. What is his game? Is he against Carla? Is he related to those things?”

Another added: “I’m worried, why is Scott so obsessed with Carla?”

Inside Prince Harry and Meghan’s secret talks with Queen and Charles as it’s revealed...

Meghan Markle used ‘no notes’ during Black Lives Matter speech but has had ‘lots...

Kate Middletons 15 black and white Zara dress sells out within THREE HOURS of...