CORONATION Street star Kathryn Hunt has been captured in a rare photograph taken almost 20 years after she left the soap.

Kathryn played factory worker Angela Harris in Corrie from 2002 until 2005 before her character was sent to prison.

Kathryn Hunt starred in Coronation Street from 2002 to 2005

Back then, the actress had a big mop of dark brown curly hair and she was at the centre of several dramatic storylines.

Angela was eventually jailed for perverting the course of justice, wiping Kathryn from the show.

But one keen Corrie fan has tracked down Kathryn before posing for a snap with her.

In the photo, the former soap star appeared more than happy to oblige and grinned while he clicked away.

However, Coronation Street viewers may not recognise Kathryn at first glance, as she looks very different to her noughties character Angela.

Kathryn has now chopped off her long curly hair and let the colour change to a natural grey shade, with white tendrils at the front.

On the day she was photographed, she was sporting a casual black jacket and was wearing a black and white leopard print scarf.

The fan shared his snap on Facebook, writing: “Me and Kathryn Hunt.”

Angela Harris and her husband Tommy, along with their children Katy and Craig, arrived in Coronation Street in November 2002.

The family went under the name Nelson and had been forced to relocate to Weatherfield after Angela helped put gangster Tom Morgan behind bars by testifying against him.

However, within 12 months, soap fans watched in horror as Tom’s brothers tracked Angela down and held her at gunpoint.

Things got even more dramatic in the months that followed, after her daughter Katy bludgeoned Tommy to death in a moment of rage.

Angela took the blame for her daughter’s crime and, although Katy ended up confessing before taking her own life, she was still jailed for lying to the police.

Since leaving Coronation Street, Kathryn has starred in a long list of popular TV shows, including Casualty, Still Open All Hours and Scott and Bailey. 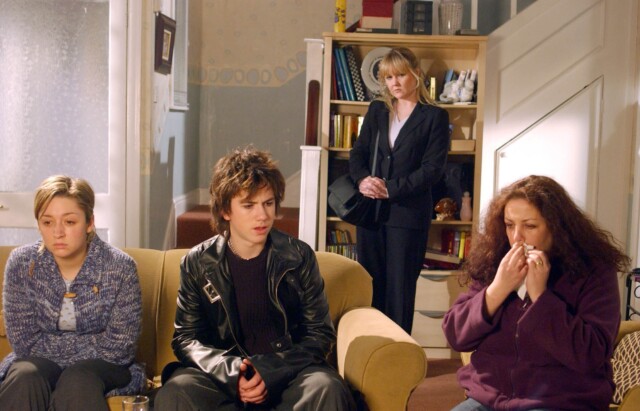 Kathryn’s character Angela tried to cover up for her daughter Katy’s crime
Did you miss our previous article…
https://hellofaread.com/soap-opera/eastenders-shock-as-janine-butcher-makes-a-decision-after-pregnancy-bombshell/

Magic the Gathering and Fortnite crossover cards are out

How to watch today’s Nintendo Direct — and what to expect