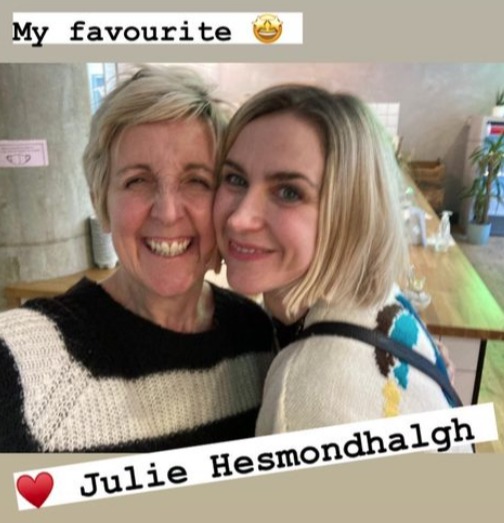 Becky McDonald actress Katherine called Julie, who played Hayley Cropper in the soap, “my favourite” as they both beamed cheek to cheek.

Since leaving Corrie both actresses have landed major telly roles.

Katherine is one of ITV’s biggest stars having appeared in Mr Selfridge, Cheat and Liar. She also featured in BBC series’ The Night Manager and Happy Valley.

Julie, 52, also starred in award-winning Happy Valley as well as Broadchurch and The Pact – about a group of working women who killed their loathsome boss on a staff night out.

Corrie fans recently begged for Katherine to return after she shared photos from the show to celebrate the 10th anniversary of her exit.

The lovable loudmouth, who was married to Steve McDonald from 2009 to 2011, was at the centre of numerous emotional and comical storylines.

Taking a trip down memory lane, Katherine posted a photo of her character wearing a red off-the-shoulder ball gown while standing at the doorway of Roy Cropper’s café, Roy’s Rolls.

In another snap, Katherine could be seen wandering down the cobbled street in another a silver halter-neck number accessorised with silver chains, holding a metallic clutch bag.

She captioned her Instagram snap: “A decade* ago… she flew away @coronationstreet @itv.”

Becky’s notable storylines included her drunken rampages, two miscarriages and her desire to adopt a child.

On the day of the their wedding Becky was so drunk that they had to postpone the ceremony.

After two miscarriages Becky realised she wasn’t able to have children.

Following the divorce she left the soap and moved to Barbados with her new fiancé Danny Stratton. Corrie fans have begged Katherine to return to the ITV soap

Prince Harry warned that Charles’ ‘patience will run out’ if he continues to ‘attack...

Molly-Mae Hague shows off her huge walk-in wardrobe as she finally gets organised after...

Meghan Markle and Prince Harry vow to go carbon neutral after being slammed over...

Prince Harry and Meghan Markle to face William and Kate for first time since...