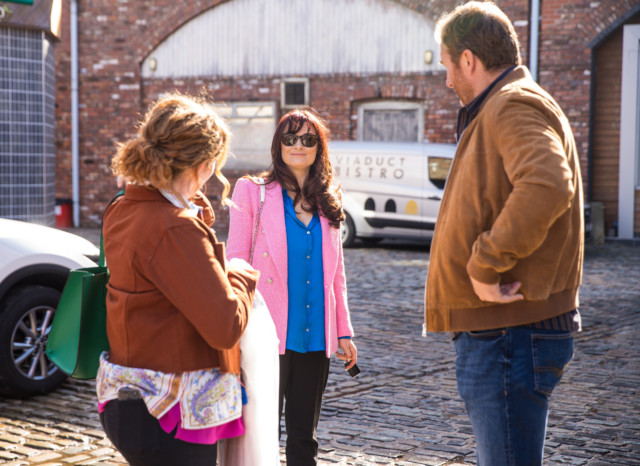 FIZ Stape’s love story with Phill Whittaker is taking them down the aisle next week – but there’s trouble brewing. But what trouble does she have in store for Fiz and Phill ahead of their wedding?

Phill (portrayed by Jamie Kenna) is convinced Fiz (Jennie McAlpine) is the one for him and asked her for her hand in marriage.

Despite finding out he was planning on writing a book about her connection to serial killer John Stape, and feeling betrayed in the process, Fiz accepted, finally ready to move on from former flame Tyrone Dobbs.

But there’s another ex set to cause a stir ahead of the couple’s wedding.

The lovebirds are rattled when Phill’s former wife Camilla shows up in the cobbles – what does she have planned? Where Coronation Street fans will recognise Dr Thorne from

In scenes due to air, Camilla arrives in Weatherfield days before the wedding, dramatically stepping out of a car and introducing herself to Fiz.

Phill is stunned but assures Fiz has nothing to fear from Camilla as he’s intent on going through with the wedding.

With things already off to a rocky start due to Evelyn Plummer’s feud with Mimi Whittaker, Fiz feels obliged to invite Camilla to her hen do at the Rovers later in the week.

But things become awkward during a game of Mr and Mrs as it’s clear Camilla knows Phill far better than Fiz does.

Camilla makes things worse when she asserts Phill wants her back and they are still in love.

Later on, Fiz confronts her future husband about apparent emails that he sent Camilla.

Phill insists he hasn’t sent anything, leading to his mother Mimi being accused of doing it for him.

Fuming, Phill banishes the snobby character (played by Margot Leicester) from the house and his wedding.

But is Mimi really to blame?

Or could Camilla have some tricks up her sleeve to sabotage Fiz and Phill’s big day?

Former Emmerdale actress Louise Marwood will be joining the line-up as the new character.

The 43-year-old is most notably known for the role of the late Chrissie White in the ITV Dales, portraying the character between 2014 and 2018.

In 2010, she first appeared in the Yorksire-based soap as Fiona Heath for a brief period of time.

Speaking about her Emmerdale exit in 2018, Louise said: “I am going back to London now, so who knows what’s next?.”

“It’s that thing of going to auditions. It was the right time to leave, as three years is a good stint to do.”

“It’s very tempting to stay but my life is in London, so it was time to go.”

Louise has kept a low profile since her stint in Emmerdale. How will her time in the cobbles pan out? Fiz invites Camilla to her hen do at the Rovers Louise Marwood is known for her Emmerdale role as Chrissie White
Did you miss our previous article…
https://www.hellofaread.com/soap-opera/eastenders-spoilers-kat-slater-drops-a-bombshell-on-phil-mitchell-behind-bars/

Royal Family news – Queen health fears force her to suddenly pull out of...