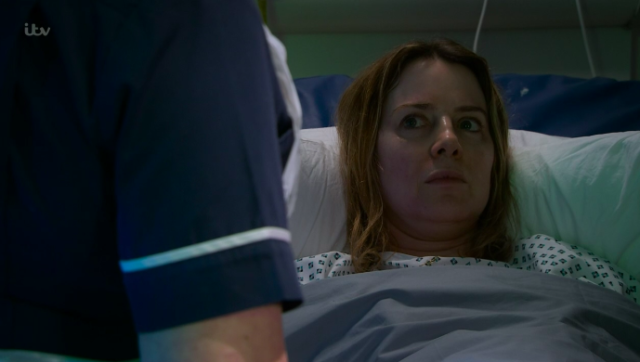 CORONATION Street fans are in shock after Abi Franklin abandoned her baby in hospital.

The mechanic – who is played by actress Sally Carman in the ITV soap – went into premature labour tonight.

She welcomed a baby boy.

But after giving birth, the baby was rushed to intensive care, and Abi didn’t even get to hold him.

The nurse told her: “I’m sorry you didn’t get to hold him – we had to take him straight to intensive care.

“Aside from being very premature, he’s got breathing issues.

“And we’re not sure how much he’s been affected by the drugs and alcohol that you’ve been using.

“I’m going to come back with the doctor but we’d like to have an honest chat with you.”

But before the doctor could return, Abi fled the hospital and went back to Coronation Street.

Letting herself into the house, she climbed onto the sofa and sobbed herself to sleep.

The next day Debbie arrived and launched into a rant against Abi.

She told her to get out of the house.

“Get out of this house, our Kevin wants you gone,” she said.

At the hospital, a printout of a CCTV image of Abi in her hoodie had been put out with an appeal for her to come forward.

But at home she was working her way through three large bottles of vodka.

Viewers were in shock at what Abi had done.

Who is Queen Cobra on The Masked Singer?