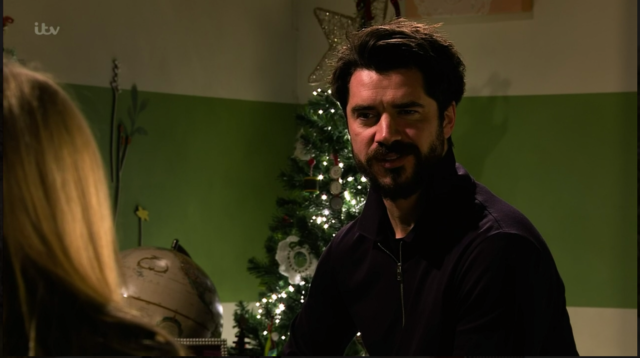 CORONATION Street fans are in shock after Faye Windass admitted to attacking Adam Barlow – in a cruel case of mistaken identity.

The former bistro assistant manager – who is played by actress Ellie Leach in the ITV soap – left Adam for dead after attacking him in the dark thinking he was Ray Crosby.

Adam Barlow was left for dead after a vicious attack

Viewers know Ray had been forcing Faye into sex to keep her job and had tried to rape her earlier that week.

She was forced to confess to Gary and Maria after the hairdresser accused the builder of attacking Adam – and Kelly Neelan accused him of killing her dad.

After defending him against Rick Neelan’s daughter Kelly, Faye told him: “I know you wouldn’t hurt her dad and I know you didn’t hurt Adam.”

However Maria was there to try and make her change her mind.

She told Gary: “Drop the woe is me act and just admit what you’ve done.

“Sorry Faye I can’t let him manipulate you like this – you have no idea what he’s capable of.

“She thinks her big brother wouldn’t harm a fly. You had issues with Adam didn’t you? And you tried to sort it out the Windass way.

“You bashed his head in and left him for dead. You’ve got form, haven’t you, Gary? Why don’t you tell her why kind of bloke you really are? Just admit it.” Gary defended himself, saying: “Look I don’t care that he got hurt but it wasn’t me that did it.”

“I didn’t touch him, Maria,” he insisted as Maria screamed at him calling him a liar.

Faye broke down and admitted the truth: “He’s not a liar, I am. I’m sorry. But as the clock struck midnight on New Year’s Eve, Faye revealed she was the one who attacked Gary

Corrie were fans were in complete shock at Faye’s admission, saying she was they last person they suspected.

One wrote: “So it was Faye. She’s the last 1 I suspected! It was a bit thick to mistake Adam for Ray tho.”

A second said: “ONCE AGAIN, I get a whodunnit wrong. Faye never coped with what Ray did to her even though she said that she did. That’s why she did what she did, but in this case it was the wrong person.”

Another added: “Did not expect that!!!”

Did you miss our previous article…
https://www.hellofaread.com/soap-opera/eastenders-max-bowden-strips-naked-for-a-bubble-bath-photo-as-he-spends-26th-birthday-in-isolation/

Daily bus hopper tickets & contactless coming to ALL buses as part of Boris...