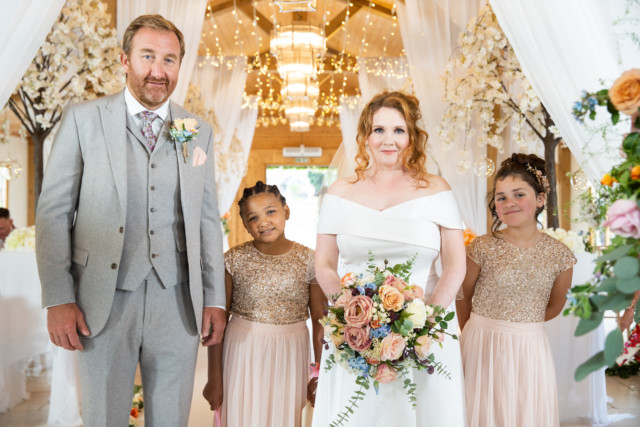 The knicker stitcher – who is played by actress Jenny Alpine in the ITV soap – tied the knot with Phill in tonight’s episode.

“I Fiona give you this ring as a symbol we are now an unbreakable team…” she tried to say but feeling Vera’s earring in her ear, she stopped in silence.

Pausing she told him: “Sorry, can I try that again?

“I give you this ring as a symbol we are now an unbreakable team. Please wear it as a sign of my love and as notice to the world that you have chosen me to be your wife.”

The registrar pronounced them as man and wife and they kissed.

But all was not well with Tyrone looking devastated as the happy couple walked out.

At the reception as Evelyn and Mimi sang a duet, Fiz dropped a bombshell on Phill.

“Please, don’t do this to me,” he said as Fiz told him she needed to talk to him.

Taking him outside, she told her new husband: “I’m sorry.

“You are the nicest guy, you’re kind and funny and handsome and successful.

“I know it’s messed up. My heart should be bursting out of my chest today, I should be the happiest woman but I’m not.

“And I don’t know why I’m not. I thought I loved you. I didn’t know until today, not for sure. I’ve been lying to myself and to you. It’s not fair on either of us. It’s unforgivable, I know it is.

Phill told her to go insisting he would tell the guests – and she ran back into Tyrone’s arms.

Tyrone told her he loved her too and the pair reunited leaving fans in shock.

One wrote: “Poor Phil. I did warn you, though.”

A second said: “Oh dear, that was a shortest marriage ever for Fiz and Phill.”

Another added: “Nah Feez that is nasty ness.” Tyrone attended the wedding after their daughter asked him to Did you miss our previous article…
https://www.hellofaread.com/soap-opera/eastenders-big-mos-comeback-revealed-as-cast-film-at-her-new-home/

Meghan Markle arrives to read her own picture book The Bench to kids at...

All the FREE Xbox and PS4 games you can claim right now – before...