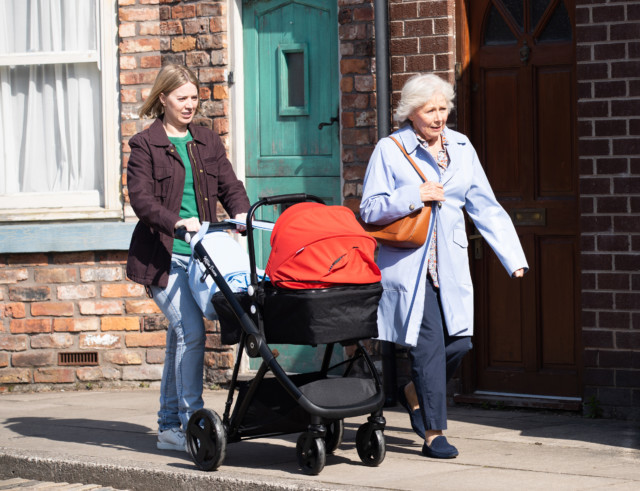 Ten years after her last appearance in Coronation Street, Wendy Crozier returned to help Abi get custody of her baby last month.

In upcoming scenes, Abi is hurt when she discovers that Wendy has gone behind her back.

Abi visits Wendy but and as the pair chat, Abi watches with suspicion as she taps away on her laptop.

Convinced Wendy has something to hide, Abi opens her laptop and reads with fury the notes she’s made about her.

Clearly hurt, Abi tells Wendy that she really thought she was making progress with Alfie.

Will Abi lose her son again?

Alfie’s fate in Weatherfield has been uncertain following his father Imran Habeeb’s death.

Imran Habeeb met an unexpected demise in recent episodes of the ITV soap but as he did so, the fate of his son Alfie was left hanging in balance.

This was mostly due to the solicitor’s unlawful scheming against Abi Webster (portrayed by Sally Carman) as he bribed private investigator Ben to lie about her in court.

Last month, the mechanic had a chance at getting her son back as she learned she had to reapply for custody of Alfie, before finding out the hearing was due to take place the following day.

After a call from the social worker, a despondent Abi told her husband Kevin (played by Michael Le Vell) that the best she can hope for is custody of Alfie but under the supervision of a foster carer.

The judge orders that Alfie be placed with Abi in a mother and baby foster facility, where the latter will be assessed.

Abi is then introduced to a familiar face – Wendy, their foster carer.

And when Abi reveals she’s from Coronation Street, Wendy keeps her counsel.

Actress Roberta Kerr made her first ever appearance in the cobbles in 1989 when she had an affair with Ken Barlow which led to him divorcing his wife Deirdre.

She tied the knot with Christos Papadopoulos in 1991 but was widowed later on, coming back to Coronation Street in 2012 and attempting to rekindle her affair with Ken.

Did you miss our previous article…
https://www.hellofaread.com/soap-opera/eastenders-teases-shock-grant-mitchell-return-as-sharon-watts-takes-desperate-action-to-save-phil/