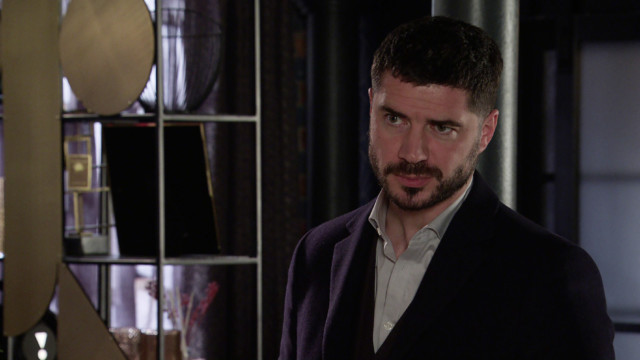 And things take a horrific turn in an upcoming episode of Coronation Street as the solicitor gets held at gunpoint.

Who is after Adam?
Adam and Imran are held at gunpoint

While his marriage with Sarah (Tina O’Brien) could face some danger in the form of Lydia Chambers (Rebecca Ryan), Adam (Sam Robertson) is also being harassed by a mystery enemy.

Once his car was keyed, he was convinced that his ex Lydia was on to him but was forced to admit he was mistaken by Craig.

In scenes due on screens next week, however, Adam is under immense threat when his office gets swatted.

But this isn’t his stalker: Adam is held at gunpoint by armed police, alongside Imran Habeeb (Charlie de Melo).

Both solicitors are shocked to learn that their office is being raided and searched for a firearm following a tip-off, likely to have been given away by Adam’s stalker.

The police turn Adam’s office upside down and, soon, Imran and Sarah turn on him, blaming him for antagonising Jeremy Bremner.

After Lydia was proven innocent, Adam began to believe that Jeremy Bremner could be acting out, struggling to get over a boundary dispute he was involved in.

This leads Adam to insist on reporting Jeremy to the police for the false tip-off, antagonising Jeremy once again… and potentially making matters worse?

Following his office mishap, Adam receives a silent phone call as his tormentor stares down at the outgoing call.

But Adam won’t be the mysterious stalker’s only victim.

In other scenes, his wife Sarah is taken aback by a bouquet of flowers sent to her.

She quickly thanks Adam for his beautiful gesture but the latter is puzzled: he never sent her any flowers.

Fishing out for the card, Adam and Sarah are presented with a chilling message.

Soon, Sarah comes to the conclusion that the stalker could still be in their home… and that she could even be trapped with them.

While Jeremy Bremner could be behind Adam and Sarah’s torment, Coronation Street will undoubtedly be reminded of Lydia as ITV bosses teased a love triangle à la Fatal Attraction.

Corrie fans are convinced that Lydia could be deranged and ready to make Adam feel uneasy following their relationship.

But how will Sarah and Adam cope with an unhinged stalker on the loose?

Coronation Street airs on ITV every Monday, Wednesday and Friday at 7:30pm and 8:30pm. Sarah gets a chilling message She could be the stalker’s second target

Inside Catherine Tyldesley and her husband Tom’s babymoon to Bath with spa day and...

Holidays are ON and ministers to sign off air bridges today as Brits will...