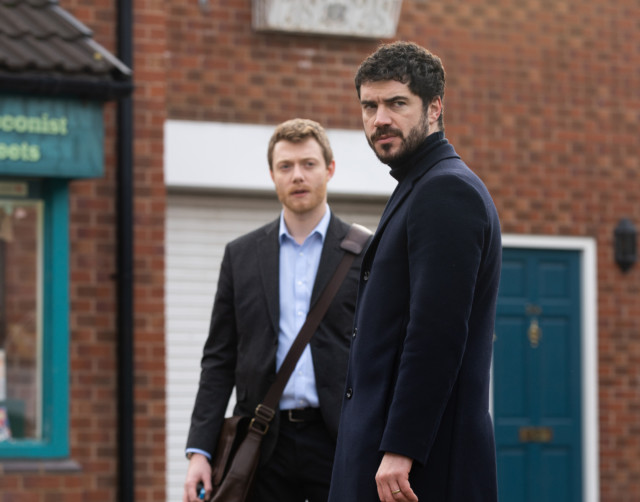 IN recent weeks, bunny boiler Lydia Chambers has driven a wedge between Adam Barlow and his wife Sarah.

Tired of being vilified, the solicitor makes a shocking declaration about his spouse next week in Coronation Street.

Adam is down in the dumps

From his car to his marriage, Lydia left Adam (played by Sam Robertson) nothing to fight for.

The Underworld PA recently made sure to pin a crime on her former boyfriend, leaving him to deal with the police on his own after lying about having an affair with him.

This led to Sarah (Tina O’Brien) to throw Adam out of his own home.

Later on, Adam’s career and credibility as a solicitor was thrown into jeopardy with a series of harmful comments about him.

Coming up, Adam hits rock bottom and is sick of being treated like the bad guy.

Adam drowns his sorrows and flirts with a girl at the Rovers – before making a horrifying claim about Sarah.

During his conversation with the stranger, Adam goes too far and tells her his wife died in a car crash.

His uncle Daniel Osbourne (Rob Mallard) is warned by his girlfriend Daisy Midgeley (Charlotte Jordan) about the incident and arrives just in time to explain that Adam’s wife is still very much alive.

Drunk and morose, Adam announces he is going into town but Daniel is determined for him to patch things up with Sarah.

As Adam’s turmoil carries on, Sarah is heart-broken, believing he was unfaithful to her due to Lydia’s lies.

But Carla Connor (Alison King) appears to see right through her PA and advises Sarah to think hard before cutting Adam off completely, admitting she isn’t sure whether Lydia can really be trusted.

Fans have been convinced Carla would be exposing Lydia‘s schemes after she confronted Adam.

At the time, the businesswoman was telling him to stay away from the Underworld factory once his supposed cheating was revealed to Sarah.

Adam took the opportunity to assure he had never been cheating with Lydia.

But will Sarah ever find out about his lie concerning her well-being?

Can Sarah ever come to her senses about Lydia?

More importantly, will Lydia’s stalking and lying ever be exposed?

Coronation Street airs at 8pm on ITV every Monday, Wednesday and Friday. But will Lydia’s lies ever be exposed?

I’m A Celebrity 2020 star Shane Richie says the show will help him pay...

Love Island’s Shaughna shows off the results of her liposuction operation in an orange...

EastEnders Maisie Smith looks a world away from Tiffany as she flashes abs and...