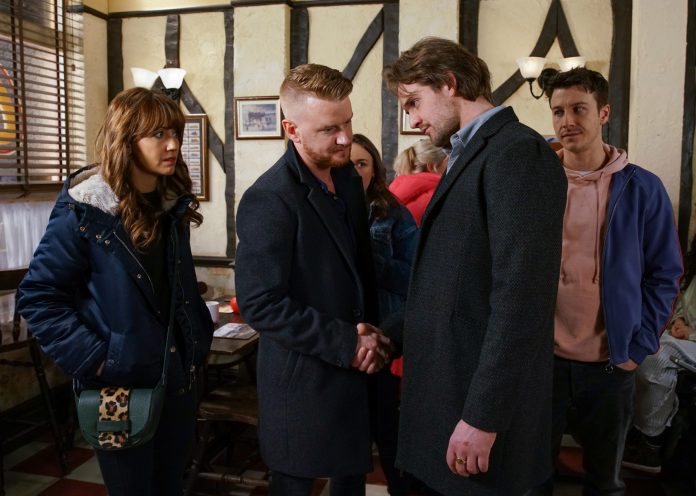 Ali is still in love with Maria but she is quick to claim she doesnt feel the same way on the ITV soap.

Corrie fans will know that Gary and Marias relationship didnt get off to the best of starts, with Gary having to fight off ex lover and drug addict Ali Neeson from the beginning.

And when Gary spied Maria sharing a steamy kiss with Ali, he stepped things up a notch and started threatening the doctor.

To make matters worse for the couple, Maria ended up miscarrying their baby when she contracted measles in a recent episode.

Official spoilers have revealed that history will repeat itself as Maria is set to share a sneaky snog with Ali ahead of Gary’s proposal.

In a further upcoming episode, Maria regrets her decision to rekindle the romance with Ali.

In upcoming scenes, Ali calls at Marias flat and begs her to give their relationship a chance.

When Maria brushes him off, he insists she still has feelings for him.

Later in the week, Maria confides in Carla that she slept with Ali again.

The hairdresser insists that it was a mistake and that Gary is the one she wants to be with.

Later in the week, Ali is devastated when Gary and Maria announce their engagement publicly.

But Ali puts on a brave face and shakes Garys hand, refusing to let Gary see him wounded.

But later, an emotional Ali visits Maria in the barbers and begs her not to marry Gary.

But Maria orders Ali to the ginnel and demands that he stay out of her life – for good this time.

Is she making a huge mistake?

Who is Dancing On Ice star Faye Brookes and when did she leave Coronation...

Square Enix invests up to $35million in Bitcoin startup