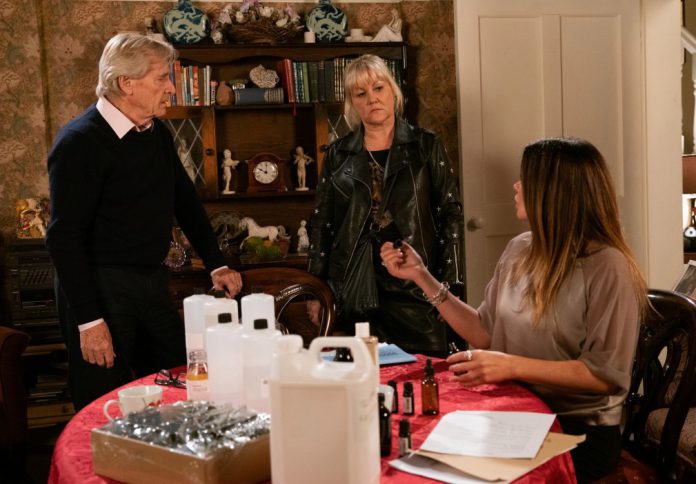 When a delivery of beard oil supplies arrives, former factory boss Carla whos played by Alison King in the ITV soap – makes the decision to try and keep Sineads business going for the sake of her widower, Daniel.

Determined to make it work, Carla begins to seek out Sineads recipe.

Beth is furious, convinced that Carla is trying to cash in on Sineads death, but will she change her mind when Carla reveals that all the profit will be going towards baby Berties future?

Later, Carla tells Ken that shes had a meeting with a company that are interested in buying Sineads beard oil, but she really needs some input from Daniel.

Corrie fans were in bits last week when young mum Sinead who was played by Katie McGlynn lost her battle with cervical cancer.

The hard-hitting episode began with Sinead drifting in and out of consciousness in her bedroom after refusing to see out her final days in a hospice.
Surrounded by husband Daniel (Rob Mallard), auntie Beth, and son Bertie, Sinead battled side-effects and illness as she slowly accepted her fate.
She discussed the after life possibilities with vicar Billy as she admitted that she hopes she’ll be able to look over Bertie once she has gone.

Fans previously expressed their fury after the character’s mum didn’t visit her on her death bed – despite being told that she has just days left to live.
However, last Fridays show saw Arlene rush to her daughter’s bedside after Sinead warned devastated Daniel that these would be her “final hours” – and he should call her to let her know.
Getting tired, she asked Daniel to tell her family to leave – with the distressed relatives promising to return to see her in the morning, unaware that she would pass away before then.
Breaking down in tears, Sinead sobbed that she “isn’t ready” to go as she refused morphine for her pain through fear that she wouldn’t wake up.

Cuddling Daniel and their son in bed, Sinead then gave her husband advice on how to care for the baby – telling him to “relax” during bath time and that he is more than capable of being the dad that Bertie needs.
She broke down as she realised that the baby is too young to remember her, before admitting she is “glad” he won’t have any memories of her being ill and dying.
The pair sobbed in bed together as Sinead said that she could feel the “tiredness” growing and that she doesn’t want to go yet, with Daniel begging her not to go.

Meanwhile, the other Weatherfield residents gathered in the Rovers to support each other and remember Sinead together.

Daniel read Bertie a bedtime story, with his mum desperately trying to stay awake and listen before peacefully passing away – with Daniel desperately trying to compose himself for Bertie’s sake once he noticed before breaking down in tears.The episode ended with Billy sharing a prayer over Sinead’s body while the other characters were shown coming to terms with the news.
Taking his wife’s advice, Daniel then prepares Bertie for his bath – warning him that he “won’t be as good as his mum” but he will do his best.
Taking to Twitter, one fan sobbed: “Corrie is hard to watch tonight, I’m in bits.”
Another wrote: “I’m sat here bawling my eyes out, the actors are breaking my heart.”
A third said: “Absolutely brutal to watch this.”