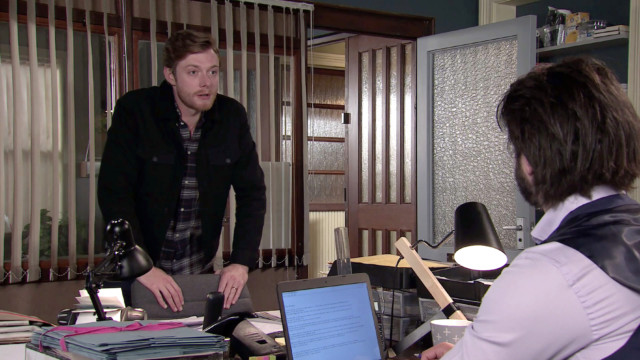 DANIEL Osbourne tells Adam Barlow he’s been paying Nicky to dress up as Sinead next week in Coronation Street.

Adam will threaten to destroy Daniel’s trust when he pays Nicky to stay away from the widower.

Corrie fans know that Daniel has been confiding in newcomer Nicky about the tragic death of his wife Sinead after she lost her battle to cancer.

But Nicky devastated Daniel this week when she told him she was too busy to see him and suggested he ring her friend Cherry.

In scenes set to air later this week, Daniel is set to make a scene when he spots Nicky in the bistro with another client.

Chaos breaks out when Daniel publicly offers to pay Nicky more money if she’ll spend time with him. Adam pays Nicky to stay away from Daniel

Next week’s episodes of Corrie will see Daniel call at the office and ask Adam to head to the police station to represent Nicky after the fight at the bistro.

Adam heads to the station only to discover that Nicky has been released without charge.

Nicky is touched when Daniel explains that she’s been helping him cope with his grief.

Later, Daniel apologises to Ray for causing a scene in the bistro. Daniel has been finding comfort in escort Nicky’s company

Daniel calls Nicky and manages to persuade her to come round to the flat for a drink just as friends.

Daniel admits to Adam how he’s been paying Nicky to dress up as Sinead so he could pretends she was still with him, but that they’ve decided they’re better off as friends.

But Adam isn’t convinced and later waits for Nicky outside the flat.

Adam intercepts Nicky and stuffs some cash in her face, asking her to stay away from Daniel.

But will she do as Adam suggests?

Actor Rob Mallard – who plays Daniel on the ITV soap – told TV Times that Daniel is yet to grieve properly for Sinead and face up to her death.

He explained: “When Daniel is on the cobbles or with his family, he is acting as though he has found a way to move forward.

“The reality is that behind closed doors he hasn’t moved on at all.”

Stay warm and cosy without spending a fortune on heating bills with our top...