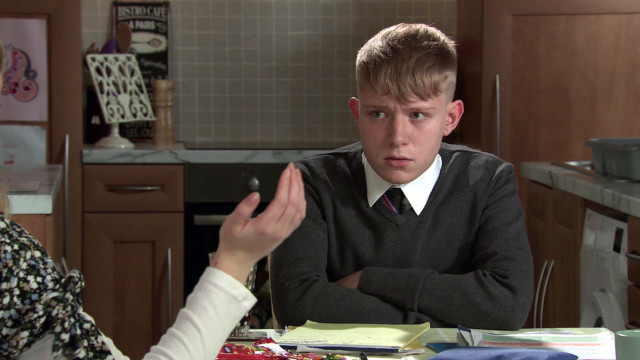 DANIEL Osbourne has been at odds with Weatherfield teen Max Turner in recent months.

But when one of his misdeeds crosses the line in Coronation Street, the teacher issues a troubling threat to his adoptive father David.

Max (played by Paddy Bever) is continuously wreaking havoc in the cobbles and Daniel (Rob Mallard) has had enough when he brings trouble to his ex Nicky Wheatley.

In upcoming episodes of the long-running ITV soap, Daniel rails at Max for ruining the latter’s life but David (Jack P. Shepherd) leaps to Max’s defence in a heartbeat.

However, Daniel refuses to back and issues a shocking threat to Max.

The teacher is aware the teen is guilty of spiking Amy Barlow’s drink during the Valentine’s Day dance – an incident which led 18-year-old straight to hospital. Daniel is at his wit’s end with Max and tells him that it’s time Amy knew who spiked her.

To makes matters even worse for the Weatherfield High student, Daniel asserts that if Max doesn’t come clean, he will speak up for him.

Troublesome Max is used to get away with his antics and assures David and Shona (Julia Goulding) that Daniel is bluffing as he has too much to lose.

But Amy (portrayed by Elle Mulvaney) shows that her spiking horror has left her extremely wary.

When she misreads one lad’s admiring glances in later scenes, she throws a cup of coffee over him and has a meltdown believing he could have spiked her drink.

This propels Daniel to tell David about the incident, hinting that he won’t let the matter go as she needs to know the truth.

As mentioned above, Max has managed to get away with his bad behaviour for months.

After claiming Daniel was having an inappropriate relationship with Summer Spellman, the teen upskirted the latter, which caused an uproar led by both Summer and Amy in Weatherfield High.

Later on, Max trashed Daniel’s flat before being pushed down the stairs.

When Daniel’s girlfriend Daisy Midgeley first wanted to drive a wedge between him and Nicky, she enlisted Max’s help before eventually backtracking.

Spoilers have since confirmed Max will be severely hurt following a fight with David and risks bleeding to death on the same cobbles his mother Kylie died in 2016. I need hip replacement but I’d rather be in a wheelchair, says Liam Gallagher Is this the end of the line for Max? In Daniel’s eyes, Max has crossed the line with Nicky Priti Patel urges people to call police on their neighbours if they break Christmas...

Boris Johnson pictured with wine and cheese in Downing Street garden with colleagues during...