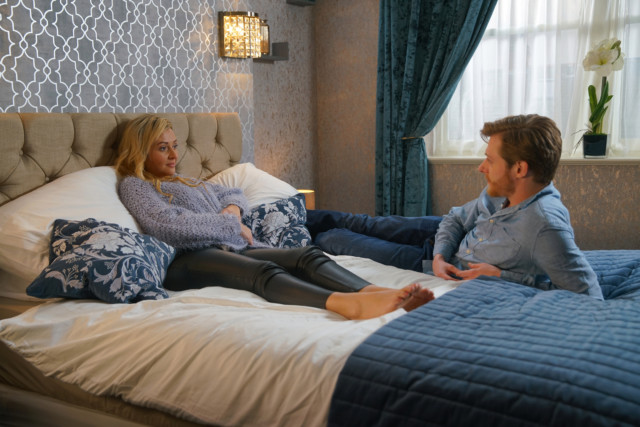 CORONATION Street’s Daniel Osbourne’s reliance on escort Nicky is going to take a turn next week – when he takes Sinead’s clothes with him to meet her.

The legal secretary – who is played by actor Rob Mallard in the ITV soap – has been paying Nicky for meetings in hotels just so he can talk to her about his late wife.

Daniel has long been struggling with his grief and hasn’t worked since her death – instead relying on his elderly dad Ken to bankroll him.

This week his nephew Adam steps in to tell him that it has to end and he needs to get a job again – and offers him the position of legal secretary to cover Leanne Battersby’s leave.

Surprisingly Daniel agrees – but next week he asks Adam for an advance on his wages. Stunned by his cheek, Adam hands over the cash – not knowing what it’s really for.

But when he spots Sinead’s cardigan poking out from Daniel’s bag, he leaves his uncle embarrassed – and Daniel lets him think that he carries it around in her memory.

However that will soon be shown to be a lie of omission when Daniel goes to meet Nicky with both Sinead’s clothes and his wage advance burning a hole in his pocket.

Sex worker Nicky tells Daniel that they could do a lot more for the £150 an hour he’s paying her.

But he tells her he doesn’t want sex from her – he just wants company.

Is Daniel at risk of trying to pay Nicky into pretending to be Sinead to help his grief?

And will it put a dampener on any real connection the pair could make?

Did you miss our previous article…
https://www.hellofaread.com/soap-opera/jacqueline-jossa-mistaken-for-ariana-grande-as-she-shows-off-glam-hair-extensions-in-stunning-instagram-snap/

Who is Rufus Hound’s Dancing On Ice replacement Matt Richardson?