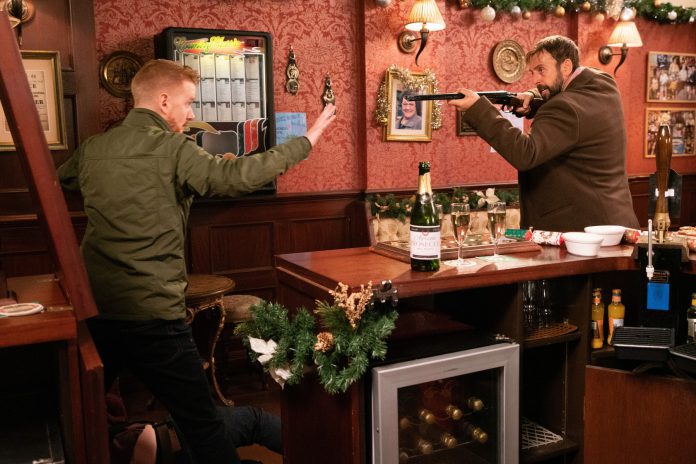 CORONATION Street’s Gary Windass will be questioned by police over Robert Preston’s death.

The builder, played by actor Mikey North, is taken in by the cops following a fatal shooting on Christmas Day.

Derek Milligan decides to get revenge on Gary after their business partnership soured.

He furiously wields a gun in the Roversduring a firefight on December 25 – and Michelle Connors loverat partner Robert, played by Tristan Gemmill, is fatally shot. Another resident is also wounded.

Later Gary is quizzed bypolice, but is relieved when he discovers him and Fiz both stuck to the story – that the only gun theyre aware of is the antique one in the shop.

Gary Windass will be quizzed by cops over Robert’s death

But worried Tyrone warns Fiz that by lying to the police, she could make matters worse.

A soap source said: Derek gets drunk and starts waving a gun around the pub.

“Theres a tense stand-off then a massive fight between the two men and two people are shot, including Robert, who dies on Christmas Day.

He makes it to hospital but suffers a heart attack and dies off-screen in a bit of snub to Tristan. Its left to Michelle to tell everyone hes dead.

Robert Preston gets caught up in a shootout on Christmas Day and is fatally shot, while another resident is wounded

Gary returned to Weatherfield to the shock news that Derek (Craige Els) had been romancing his ex Izzy Armstrong (Cherlylee Houston).

Derek, who opened up to her about his problems with booze, was horrified to learn that Gary is the father of Izzys son.

Meanwhile both Tristan and Kym Marsh, who plays his onscreen partner Michelle, are leaving the soap.

But Michelle isnt being killed off, with producers leaving the door open for a potential return.

Earlier this year Mikey Gary hinted to HOAR Online that he might be making a grisly exit from the cobbles.

He told us: Ive always said, the amount of Platts boyfriends and husbands that have died, its probably got to be me next, but Ive had a good run!

What happened to Toyah Battersby in Coronation Street?

EastEnders spoilers: Stuart Highway takes drastic action as he spirals out of control

Labour stay silent on which crucial road upgrades would be axed to fund Jeremy...

UK to make 30 million doses of coronavirus vaccine by September – if it...

Tory MP Sir Geoffrey Cox ‘rents out taxpayer-funded home’ and has made at least...