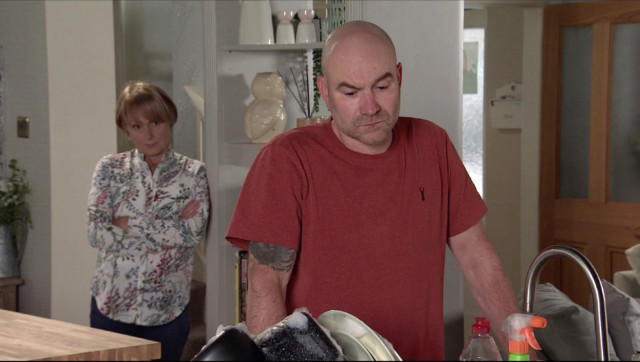 GEOFF Metcalfe’s hidden camera is finally exposed next week in Coronation Street as Tim confides in Sally about catching a glimpse of the footage of Geoff’s final argument with Yasmeen.

Viewers have been predicting the footage – which proves Yasmeen’s innocence – will be the key to Geoff’s downfall for weeks on the ITV soap after Tim walked in on him deleting it.

Geoff fed Tim a sob story about installing a camera because he felt unsafe around Yasmeen, before binning it with their used fish and chip papers.

But next week’s episodes will see the walls close in around Geoff as Tim sides with Alya and Ryan after she smashes up Speed Daal due to Geoff’s meddling.

The upcoming scenes will see Geoff rock up at Speed Daal and refuse to leave, despite Alya’s orders. Geoff enjoys winding Alya up by pointing out that legally he has every right to be there and that he’s applied for an alcohol license – and that he’ll be sticking around for the foreseeable future.

Struggling to cope with takeout orders on her own, Alya flies into a rage and throws everyone out of the restaurant before smashing it up. When Geoff and Tim arrive on the scene, Geoff is quick to play the victim.

But when Ryan tells Tim that Geoff has been undermining Alya for months, Tim starts to doubt his dad’s innocence.

Later, Tim finally turns against his dad and opens up to Sally about the CCTV camera that Geoff had hidden in the house prior to Yasmeen’s arrest.

Sally is horrified and tells Tim to open his eyes and see Geoff for the monster he is.

Have Sally’s words finally sunk in for Tim?

And more importantly, will he go to the police about Geoff’s hidden camera and footage?

Joe Duttine – who plays Tim – has teased that his character is getting closer to turning against his dad Geoff as Yasmeen’s trial looms.

Speaking to Inside Soap, the actor said: “Remember that Tim isn’t aware of what the rest of the nation knows about Geoff.

“Tim only reacts to the interactions he has with his dad, and he doesn’t want to believe that he could do anything wrong. Some families have to close ranks and protect their own, which is what Tim is doing. But I think Tim is starting to feel as if something isn’t quite right.”

The actor added: “Tim will see cracks in the picture he has of Geoff.”

“It’s a slow burn, and Tim’s remaining loyal to his dad until the stage he can no longer do so. We may be getting closer to that stage.”

Hundreds of kids to return to home learning in Wales after Xmas as Boris...